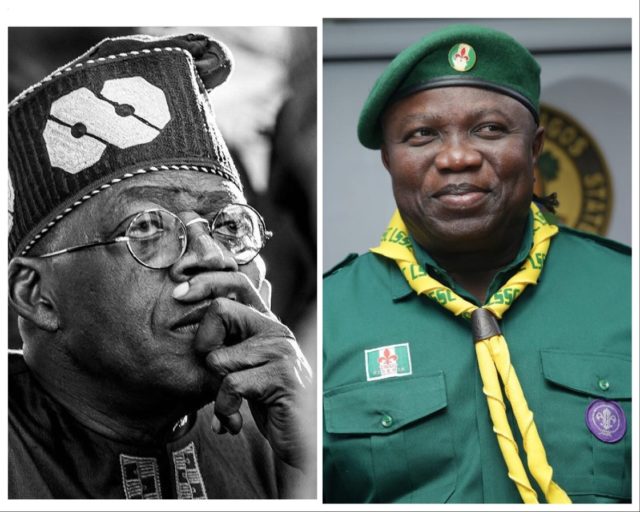 As high-wired intrigues continue to play out in Lagos State over the incumbent governor, Mr. Akinwunmi Ambode’s re-election bid, competent sources Saturday revealed that a key segment of the party led by the National Leader of All Progressives Congress (APC), Bola Ahmed Tinubu, has asked the governor to stand down his second term bid or face impeachment. The threat to impeach the governor is an escalation of pressure being piled on him to drop his quest for second term.

A competent party source sympathetic to the governor, who demanded anonymity since he was not authorised to speak on the intrigues and power play currently playing out said yesterday, “they are threatening to impeach him should he refused to bow to their demand to withdraw. The incumbent governor, who is traditionally entitled to another term is being harassed and intimidated by Tinubu’s political machine to withdraw for their new man, even though the governor had agreed to subject himself to primary. They are boasting that they will direct the State House of Assembly to immediatly begin impeachment proceedings against him.”

The APC had initially insisted on conducting direct primary election to select its governorship candidate in the spirit of democracy. But it suddenly reversed itself, directing Ambode to withdraw from the contest to enable the party present Sanwo-Olu as the consensus candidate.

It also emerged yesterday via a statement from the Vice President’s office denying endorsing Sanwo-Olu. “It was while he was coming out of the GAC meeting that Mr. Sanwo-Olu and Mr. Hamzat took advantage of the VP’S presence to take the photos which are now being falsely paraded as proof of endorsement.

“The VP did not go there to endorse Sanwo-Olu., they only took advantage of his presence,” a source at the meeting confirmed last night.”

Rather, sources at the GAC meetings hinted that Prof Osinbajo, who is believed to be supportive of a second term bid for Ambode, conveyed the view of the Buhari presidency that there should be a level playing field in the overall conduct of the primaries. APC leader threatened to impeach Ambode if the governor refused “to step down for Sanwo-Olu.” Ambode was said to have looked him squarely in the face and refused.

But Ambode Mandate Support Group condemned the call for the governor’s withdrawal as undemocratic. The group also reacted to the postponement of the APC governorship primary in the state, which has now been scheduled for October 1, saying they were confident that Ambode would fly the party’s flag in 2019 election as it has received overwhelming support from several quarters for him.

There has been uncertainty about governor’s re-election after Sanwo-Olu, currently the managing director of Lagos State Development and Property Corporation (LSDPC), and former commissioner for Works and Infrastructure, Dr. Obafemi Hamzat, declared their intention to challenge the governor in a primary contest.

As a result, the Mandate Movement, a powerful political machine of Tinubu, endorsed Sanwo-Olu for the governorship contest, heating up the state’s political climate ahead of the primary election.

With the presidential intervention, Tinubu decided to consult the Governor’s Advisory Council (GAC), the state’s highest advisory political organ, comprising 22 APC chieftains across the three senatorial districts. But in its resolution, the GAC directed Ambode and two other aspirants to face the direct primary election.

At the GAC meeting held at Tinubu’s residence, Bourdillion, Ikoyi, Friday night, one of the party chieftains explained how Ambode addressed the leaders of the GAC, justifying point by point the reasons he decided to seek re-election in 2019.

Specifically, according to the chieftain, Ambode hinged his re-election bid on the need to complete various infrastructure projects and urban renewal programmes that his administration initiated in the last three years.

Despite his justifying his re-election bid, the party chieftain stated that Lagos Central APC leader, Prince Tajudeen Olusi, asked the governor “to step down for Sanwo-Olu. He claimed that the GAC had already endorsed Sanwo-Olu as the party’s consensus candidate.”

Another party chieftain revealed that a member of the GAC, Prof. Tunde Samuel, interrupted Olusi while he was telling Ambode to withdraw from the race, observing that Olusi’s statement did not reflect a common position of all GAC members that all aspirants should face primary contest.

In response to Olusi, however, the party chieftain claimed that Ambode simply told the meeting that he “will not step down for any governorship aspirants on the ground that it is undemocratic. He also said he stood by the earlier position of the GAC that all aspirants should face direct primary contest to foster democracy in the country.

The source stated, at this point, Tinubu, who chaired the GAC meeting, became angry and quickly interjected, threatening Ambode with impeachment, if he failed to stand down for Sanwo-Olu before the primary election earlier scheduled to hold today which was later postponed till tomorrow by the APC national secretariat.

It was learnt that it was resolved at the meeting that a stakeholders’ meeting should be held on Saturday at the party secretariat, Acme road, Ogba. It was expected that Tinubu would come to the meeting to endorse Sanwo-Olu. To their surprise however, thousands of Ambode’s supporters thronged the venue chanting Ambode solidarity songs and raining curses on national leader: Tinubu ole Tinubu ole.

Eventually, Tinubu was forced to stay away. Rather than attending as originally planned, Tinubu delegated a GAC leader, Senator Anthony Adefuye, to represent him.

At the stakeholders’ meeting, Adefuye acknowledged that there was another GAC meeting, which held by 10 am on Saturday, noting that the meeting was attended by the Vice President, Prof. Yemi Osinbajo, Majority Leader of the House of Representatives, Hon. Femi Gbajabiamila, and Speaker of the Lagos State House of Assembly, Hon. Mudashiru Obasa, among others.

Adefuye said, “The meeting was chaired by the APC national leader, Tinubu. This is a meeting that we started at 10am. And we could not finish early. After the meeting, I have been mandated by the GAC to announce this to you that the primary earlier scheduled for Saturday, September 30 has been shifted to Monday, October 1.

“Also, the GAC was informed by one of the governorship aspirants, Dr. Obafemi Hamzat, of his decision to graciously step down and endorsed Jide Sanwoolu. The GAC has equally endorsed Sanwo-Olu as its preferred candidate ahead of the primaries.”

Immediately after announcing the decision of the GAC to endorse Sanwo-Olu as the party’s preferred candidate, thousands of party faithful started chanting songs of disapproval and some pelted Adefuye and other party leaders with satchet water at the stakeholders’ meeting.

With the angry reaction of party faithful, Adefuye abruptly stopped addressing the stakeholders’ meeting, which they described as undemocratic and one-man show.

Before Adefuye addressed the stakeholders meeting yesterday, Osinbajo had addressed the GAC leaders at its Saturday meeting, warning them about the dire consequences of denying Ambode the ticket which he said, might culminate in a repeat of what happened during the Osun governorship election.

An entirely different party leader revealed that Osinbajo told the GAC leaders to be mindful of their actions and not place personal interest above that of the electorate, who had made up their minds to vote continuity.

According to the source, Osinbajo categorically said he was asked by Buhari to proceed to Lagos to again appeal to APC national leader and some party leaders opposed to Ambode’s second term bid to rescind the decision in the interest of the party.

He said, “Osinbajo frankly told the GAC leaders that Lagos State Senate Caucus has endorsed Ambode. He referred to the endorsement of the chairmen of 20 LGAs and 37 LCDAs. At the meeting, he said Hon. Femi Gbajabiamila had led the House of Representatives Caucus in the state to endorse Ambode.

“The whole world knows that all these personalities have endorsed Ambode and all of a sudden, what shall we tell the world now that Ambode has done wrong all of a sudden after all the endorsements that you have made to warrant your current position?

“Osinbajo specifically asked the GAC leaders: Will it be enough to tell the whole world that it is for our own selfish interest that we are saying that we are not going to endorse Ambode? Is it because Ambode has not performed? Ambode has performed and everybody knows that.”

Reacting to the endorsement of Sanwo-Olu by the GAC, Director General of AMSG, Hon. Hakeem Sulaimon, said, “I don’t think the GAC would have done such a thing as represented by Senator Anthony Adefuye, because a few days ago, the GAC came out to say that they have resolved that His Excellency the Governor will not be granted the same privilege granted fellow governors in other states and that every aspirant should go for the primaries.

“The party said we are in a democracy and all the three aspirants should run, now they have shifted ground and they are asking the governor to step down for another aspirant, why are they saying so if they are preaching about democracy?

“Giving this development, we are alerting Lagosians that having seen the turnout of party faithful in the meeting that the party called today and the supporters of His Excellency, Mr Akinwunmi Ambode who had about 87 per cent of the crowd that was there, they have now all of a sudden postponed the primary that we are prepared for. We hope they are not trying to do anything that would create problem in this peace-loving State.”

Meanwhile, no fewer than 36 members of the Lagos State House of Assembly yesterday endorsed Sanwo-Olu. The decision of the lawmakers was contained in a statement Chairman of the House Committee on Information and Strategy, Hon. Funmilayo Tejuosho, issued yesterday.

The statement said the decision was taken at a parliamentary meeting of the lawmakers which took place at Lateef Jakande auditorium of the House on Saturday, two days before the governorship primaries of the party.

It added that the meeting was chaired by Mudashiru Obasa, the House Speaker, and the lawmakers duly signed the statement announcing the decision.

Hamzat Steps down for Sanwo-Olu

Ayinde noted that the collective mission of the campaign organisation, which was “to rescue Lagos State from Ambode’s exclusive government, got a boost with Hamzat’s withdrawal from the APC governorship primaries slated for tomorrow across 20 Local Government Areas (LGAs) of the state.”

Hamzat stepped down at a press briefing this morning and equally threw his weight behind the candidature of Sanwo-Olu. He equally directed his supporters to vote Sanwo-Olu at the primaries scheduled for tomorrow.

Hamzat said he withdrew in the best interest of the APC and Lagos residents consequent on the wise counsels of those he considered leaders, fathers and mothers.

He vouched for the personal integrity, great humility and extraordinary intelligence of Sanwo-Olu, whom he had worked closely with during the administrations of Tinubu and Mr. Babatunde Raji Fashola (SAN).

On behalf of the campaign organisation, Ayinde said, “We wish to profoundly acknowledge and commend Hamzat for his show of sportsmanship to our common cause.

“We once again use this opportunity to urge our teaming party members to come out in their numbers to vote Babajide Sanwo-Olu as the flagbearer of our party for the 2019 Gubernatorial Election.” Source Thisday