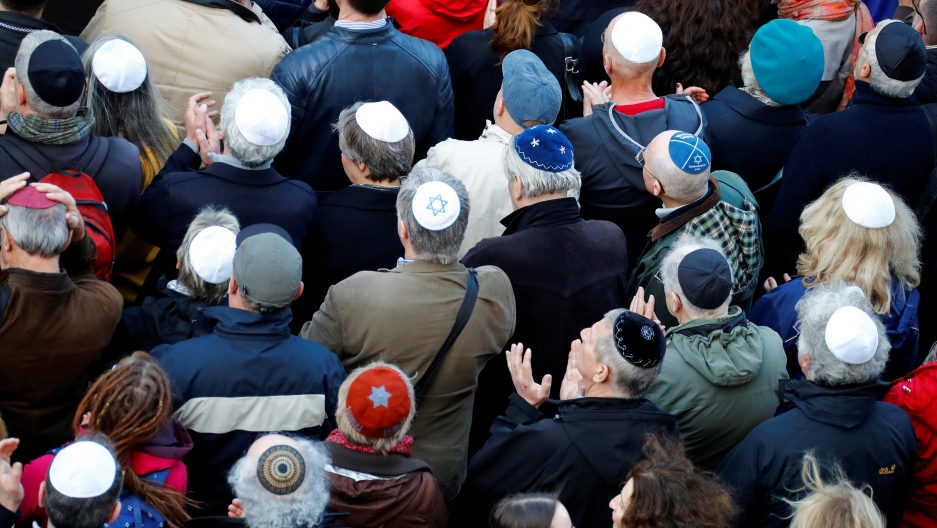 The German government’s anti-Semitism commissioner has urged Jews to avoid wearing skullcaps in public. Felix Klein warned Jews against donning the kippa in parts of the country following a rise in anti-Semitism. He said his opinion on the matter had “changed compared with what it used to be”.

Israel’s President Reuven Rivlin said the recommendation amounted to “an admittance that, again, Jews are not safe on German soil”. A sharp increase in the number of anti-Semitic offences was recorded by the German government last year. Official figures showed 1,646 hate crimes against Jews were committed in 2018 – an increase of 10% on the previous year. Physical attacks against Jews in Germany also rose in the same period, with 62 violent incidents recorded, up from 37 in 2017. Speaking to the Handelsblatt newspaper, Justice Minister Katarina Barley said the increase in anti-Semitic crimes was “shameful for our country”.

What did Mr Klein say?

“I cannot recommend to Jews that they wear the skullcap at all times everywhere in Germany,” he told the Funke newspaper group. Mr Klein suggested “the lifting of inhibitions and the uncouthness” of society could be behind the spike in anti-Semitic crimes. The internet, social media and “constant attacks against our culture of remembrance” may be contributing factors, he said. He also called for police officers, teachers, and lawyers to receive training to clarify “what is allowed and what is not” when “dealing with anti-Semitism”.

His comments came weeks after Germany’s top legal expert on anti-Semitism said the prejudice remained “deeply rooted” in German society. “Anti-Semitism has always been here. But I think that recently, it has again become louder, more aggressive and flagrant,” Claudia Vanoni told the AFP news agency.

How has Israel’s president responded?

Mr Rivlin said he was “shocked” by Mr Klein’s warning and considered it a “a capitulation to anti-Semitism”. “We will never submit, will never lower our gaze and will never react to anti-Semitism with defeatism, and expect and demand our allies act in the same way,” the Israeli president said. He also acknowledged “the moral position of the German government and its commitment to the Jewish community”.

Why is anti-Semitism on the rise?

Jewish groups have warned that a rise in popularity of far-right groups is fostering anti-Semitism and hatred of other minorities throughout Europe. Since 2017, the far-right Alternative for Germany (AfD) has been the country’s main opposition party. AfD is openly against immigration but the party denies holding anti-Semitic views.

However, a number of comments from their politicians, including remarks about the Holocaust, have drawn criticism from Jewish groups and other politicians. Last year, a survey of thousands of European Jews revealed that many were increasingly worried about anti-Semitism.