Nigeria’s National Assembly was on lockdown on Tuesday after shots were fired outside during clashes between police and a group of Shia Muslim protesters. Police used tear gas on the protesters and smoke could be seen rising from the area.The Islamic Movement of Nigeria (IMN), a group that represents Nigeria’s minority Shia Muslims, tried to enter the complex, sparking the confrontation with police. IMN members protest regularly outside the National Assembly in the capital, Abuja, calling for the release of their leader, Ibrahim el-Zakzaky, who has been in detention since 2015.

According to Bafar, a 24-year-old student who was at the protest, trouble began when the group insisted on gaining access to the National Assembly premises to present their grievances to federal legislators. “The security … took our report to go and give the legislators but perhaps they refused to inform the legislators, or the legislators refused to respond. So, we decided to enter and submit it ourselves,” Bafar, who gave only his first name for security reasons, told Al Jazeera. “But they refused us and started spraying tear gas and shooting live bullets sporadically. I saw more than three people collapsing,” he said.

Police said they had arrested 40 protesters during Tuesday’s incident. The assembly remained on lockdown as of late afternoon. Both sides blamed the other for the shooting. Police said officers had “used minimum force to disperse the unruly protesters.” In a statement, police said two officers were shot and wounded in the legs, and six other officers were injured by individuals using clubs and stones.

Two demonstrators denied to Al Jazeera that the group returned fire. “I’m told that [today] for the first time in four years they shot back”, said Tunde Ajileye, consulting partner at SBM Intelligence, a Lagos-based political and economic risk advisory firm. “If so, we’ve essentially crossed a horrible milestone. The government has worked itself into a corner where it will now see force as the only response to this and create a vicious cycle. “Essentially the cooler heads within the Shia movement are losing ground, because the more volatile ones are pointing out that the pacifist approach is not working with this Sunni-led government,” said Ajileye. “It’s about to escalate … unfortunately.” 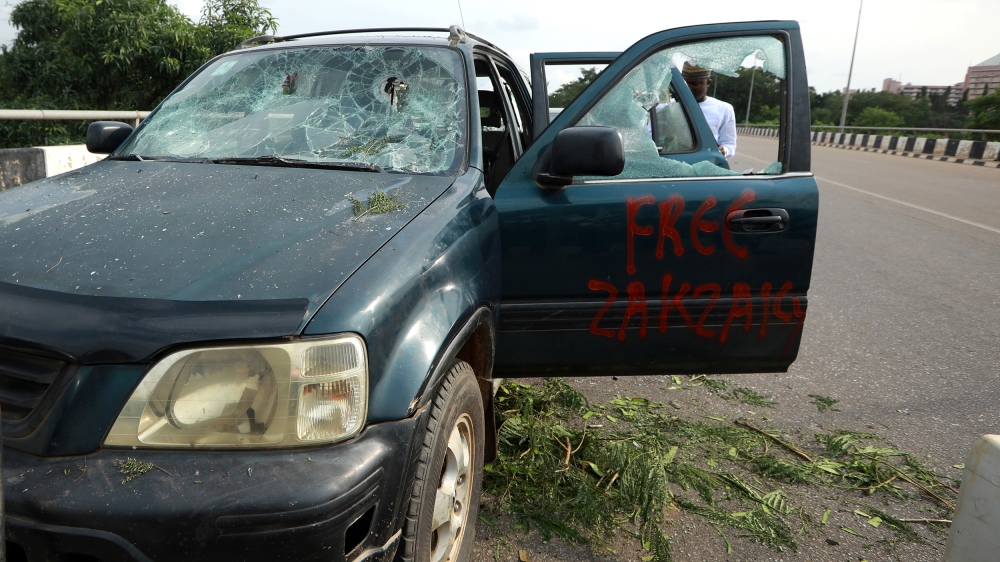 For more than three decades, the Shia-Muslim group has had regular run-ins with security forces in Nigeria while demonstrating against perceived religious persecution. Nigerian security forces have killed some 400 members of the group in response to largely peaceful protests since 2015, according to human rights groups. The group’s leader el-Zakzaky was incarcerated by successive military governments. In 2015, a coordinated military operation to capture him at IMN’s headquarters in the town of Zaria, 269km north of Abuja, killed and wounded hundreds. El-Zakzaky has remained in detention with his wife since and a number of court orders instructing the government to release them have gone unheeded. A presidential spokesman has told the press the IMN leader was being kept in custody “for his own safety”. Bafar said el-Zakzaky’s health is deteriorating and he’s not receiving adequate healthcare. “The sheikh is a surviving corpse. He is just surviving but there is no guarantee of how long he will live because he is being kept illegally without proper medical attention,” said Bafar.