The UK has raised the threat to British shipping in Iranian waters in the Gulf to the highest level. The step was taken on Tuesday, amid growing tensions in the region. On Wednesday, Iranian boats tried to impede a British oil tanker in the region – before being driven off by a Royal Navy ship, the Ministry of Defence said. Iran had threatened to retaliate for the seizure of one of its own tankers, but denied any attempted seizure. The Department for Transport said it regularly provided security advice to UK ships in high-risk areas.

Boats believed to belong to Iran’s Islamic Revolution Guard Corps (IRGC) approached the British Heritage tanker and tried to bring it to a halt as it was moving out of the Gulf into the Strait of Hormuz. HMS Montrose, a British frigate shadowing the BP-owned tanker, was forced to move between the three boats and the ship, a Ministry of Defence spokesman said. He described the Iranians’ actions as “contrary to international law”.

Guns on HMS Montrose were trained on the Iranian boats as they were ordered to back off, US media reported. The boats heeded the warning and no shots were fired. Last week, British Royal Marines helped the authorities in Gibraltar seize an Iranian tanker because of evidence it was carrying oil to Syria in breach of EU sanctions. A spokesman for the Royal Gibraltar Police said they had arrested the captain and chief officer of the Iranian tanker on Thursday, on suspicion of breaching EU sanctions, but neither had been charged.

The BBC has been told British Heritage was near the island of Abu Musa when it was approached by the Iranian boats. Although Abu Musa is in disputed territorial waters, HMS Montrose remained in international waters throughout. Defence Secretary Penny Mordaunt said the government was concerned by the incident and urged the Iranian authorities to “de-escalate the situation”. Foreign Secretary Jeremy Hunt added the UK would monitor the situation “very carefully”. Prime Minister Theresa May’s official spokesman said the government was “committed to maintaining freedom of navigation in accordance with international law”.

What does Iran say?

The navy of Iran’s Islamic Revolution Guard Corps has denied claims it tried to seize the tanker, Iranian news agencies reported. IRGC’s navy said there had been no confrontation with any foreign vessels in the past 24 hours. Iranian foreign minister Mohammad Javad Zarif said the UK made the claims “for creating tension”. “These claims have no value,” Mr Zarif added, according to the Fars news agency. 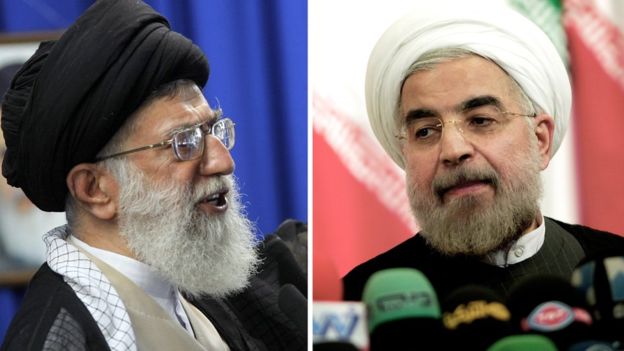 Why are UK-Iran tensions escalating?

The relationship between the UK and Iran has become increasingly strained, after Britain said the Iranian regime was “almost certainly” responsible for the attacks on two oil tankers in June. Tensions grew after the seizure of an Iranian oil tanker by authorities in Gibraltar, assisted by British Royal Marines. On Thursday an Iranian official told the BBC the seizure was “unnecessary and non-constructive escalation by the UK”.

The official claimed the oil was not bound for Syria and called for the tanker to be released. The Royal Gibraltar Police said an investigation was ongoing and the tanker, Grace 1, continued to be detained. Iran has called the incident “a form of piracy” and an official previously said a British oil tanker should be seized if Grace 1 was not released. On Wednesday, Iranian President Hassan Rouhani mocked the UK, calling it “scared” and “hopeless” for using Royal Navy warships to shadow another British tanker in the Gulf. “You, Britain, are the initiator of insecurity and you will realise the consequences later,” Mr Rouhani said. The UK has also been pressing Iran to release British-Iranian mother Nazanin Zaghari-Ratcliffe who was jailed for five years in 2016 after being convicted for spying, which she denies.