Thousands of people across the UK have protested against Prime Minister Boris Johnson’s decision to suspend Parliament just weeks before the deadline for the UK to leave the European Union.

In London, thousands of angry protesters on Saturday rallied outside Downing Street, the official residence of the prime minister, to oppose the controversial move scheduled for early September. “What Boris Johnson has done is just not British,” said builder Andrew Russell, 40, from Kent. “We have got to defend parliamentary sovereignty – closing down Parliament is anti-democratic and hypocritical.”

Politicians and leading journalists have pledged to resist the move to suspend Parliament, which they say is an attempt to deny elected politicians the chance to prevent a “no-deal” Brexit as the 31 October deadline to leave the EU approaches.

But Johnson has defended his decision to prorogue Parliament and criticised his opponents, saying they are weakening his hand in Brussels as he tries to negotiate changes to the exit deal agreed by his predecessor, Theresa May, but rejected by the UK parliament.

“I’m afraid that the more our friends and partners think at the back of their minds that Brexit could be stopped, that the UK could be kept in, by Parliament, the less likely they are to give us the deal that we need,” he told journalists on Friday.

“And so, that’s why I really hope that MPs will allow the UK to do a deal and to get ready for a no-deal Brexit – and that’s the best way forward for our country.”

The prime minister – who took office in July after being chosen by about 90,000 members of his own party following May’s resignation – insists that Parliament is to blame for the impasse over the UK’s exit.

He has pledged to renegotiate the main sticking point to a deal – an insurance policy to ensure that a border is not reintroduced on the border of Northern Ireland in order to safeguard peace on the island – but Brussels has shown no signs of budging on the issue.

EU officials indicate that so far Johnson has not presented concrete proposals to replace the so-called “backstop”, but the prime minister says he hopes to strike a new Brexit deal at a European council meeting on 17 October. He says MPs will then have a chance to vote on it, just days before the Brexit deadline, and has insisted they will have “a lot of time” to debate the issues.

But there has been open disquiet about the tactics adopted by the new Johnson government, with several legal challenges launched against his decision to prorogue Parliament, which an anonymous civil servant branded “constitutional vandalism” in a major newspaper.

A petition calling on the government not to suspend Parliament has gained more than one million signatures, while more than 50 MPs from the main parties have also pledged to set up an alternative House of Commons if the suspension goes forward. 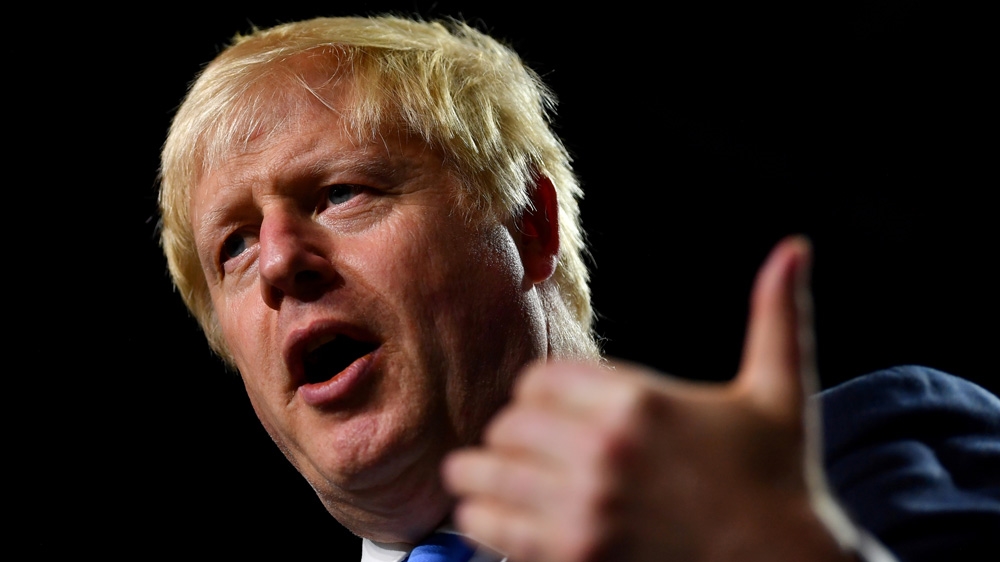 More than 80 protests across the UK on Saturday were organised by the anti-Brexit campaign group Another Europe is Possible and were led by Momentum – a left-wing caucus within the opposition Labour Party.

The gathering in London brought together people from a range of backgrounds.

Paddy Gemmell, 15, a student from London, said the suspension of Parliament is “undemocratic”.

“Since people voted for Brexit many have begun to understand what that actually means and have changed their minds – their voices should be heard,” he said. 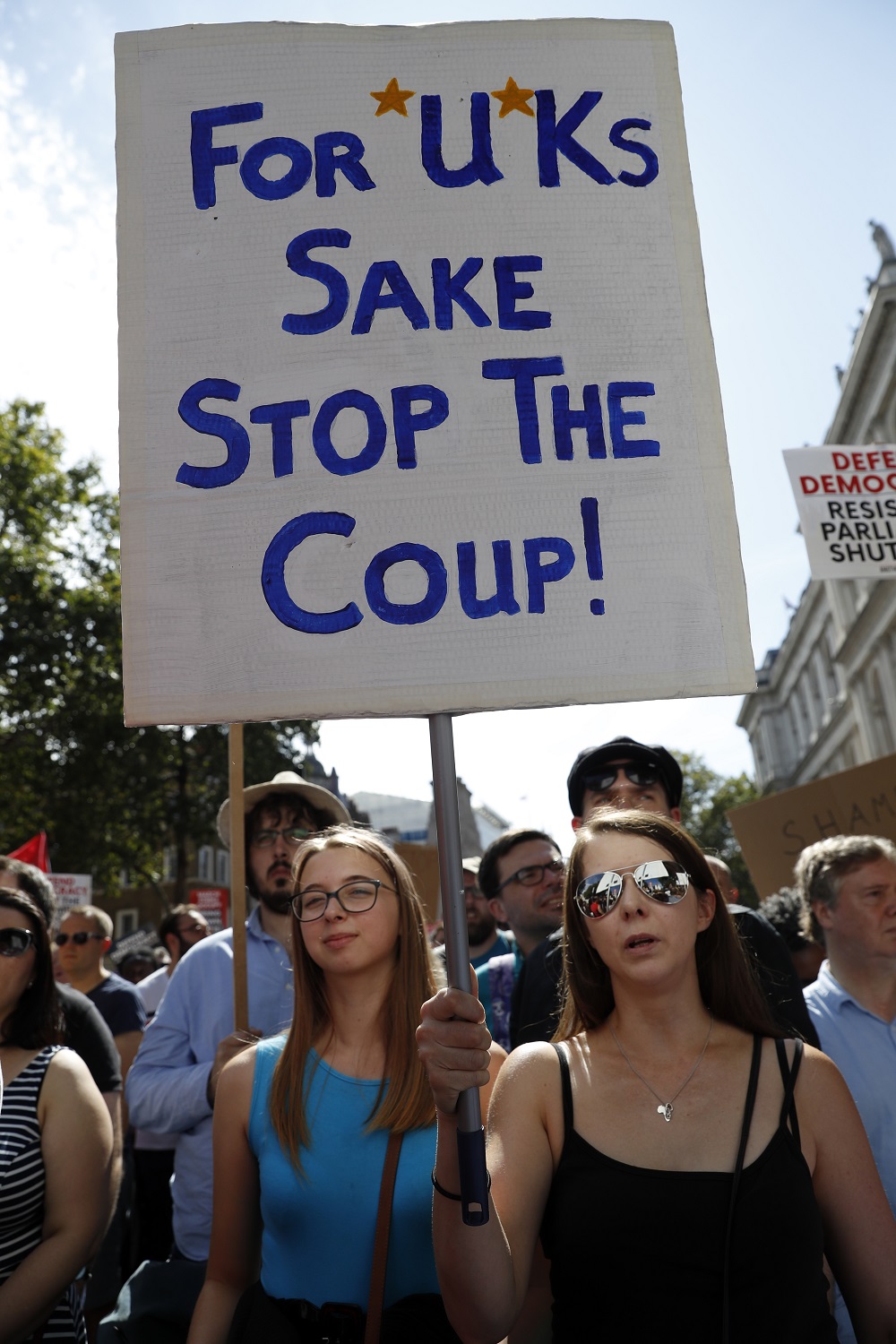 Retired interpreter Sue Sheraton, 70, from West London said: “I am here because I am appalled by the acquiescence of the Conservative Party in letting Boris Johnson go ahead with this undemocratic manoeuvre.

“Parliament represents the will of the people.”

Scotsman Danny Gilbert, 57, an editor, said it was “appalling” that countries within the UK that did not vote for Brexit will be “dragged” down with England after a no-deal departure.

“It is bad for everybody and makes Scottish independence more likely,” he said.

“It doesn’t actually matter whether you voted leave or remain in the Brexit referendum – what matters is that we are all mobilising against a Tory prime minister who wants to close down Parliament,” she told the crowd.

“Boris Johnson cannot shut down Parliament: we are here today to say no we will not stand for it,” she said. 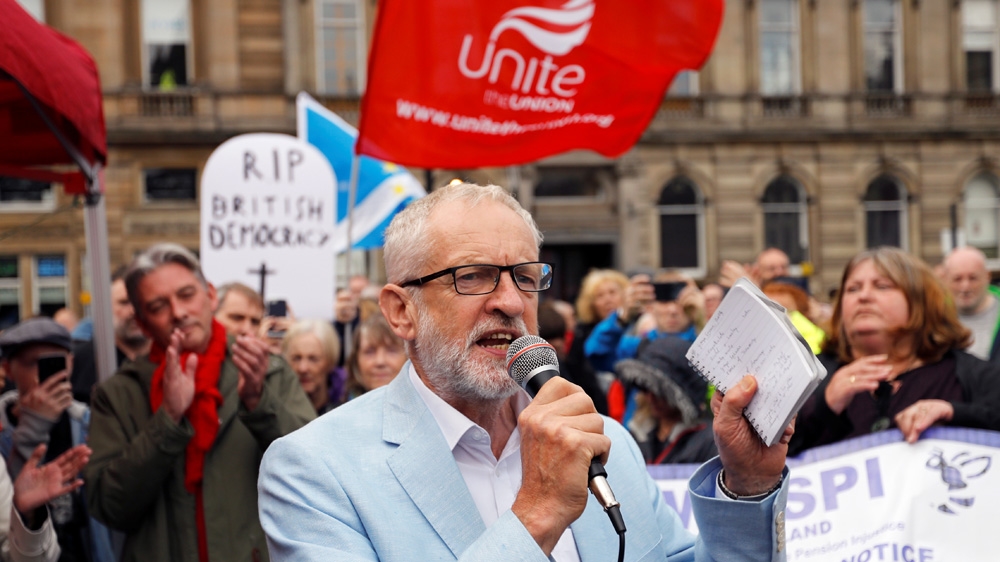