Weeks of demonstrations over local polls have turned into the biggest sustained protest movement in Russia in years. Thousands of Russians have taken to the streets of central Moscow to demand free elections to the capital’s city legislature on September 8, defying a ban which has been enforced with violent detentions during previous protests. Weeks of demonstrations over the elections have turned into the biggest sustained protest movement in Russia since 2011-2013, when protesters took to the streets against perceived electoral fraud. Chanting “Russia will be free!” and “This is our city!” on Saturday, thousands marched through one of Moscow’s thoroughfares. Moscow police said only 750 people attended the event, which was not sanctioned by the government. The demonstrators have been demanding that opposition-minded candidates be allowed to stand in the election after they were prevented from being put on the ballot.

Protesters are now also calling for the release of activists detained over earlier rallies, and opposition activist Lyubov Sobol on Saturday described the arrests as “mayhem”, blaming it on the city government and Putin’s office. “Sobyanin must resign,” she said at the rally, referring to Moscow mayor and Putin ally Sergei Sobyanin. 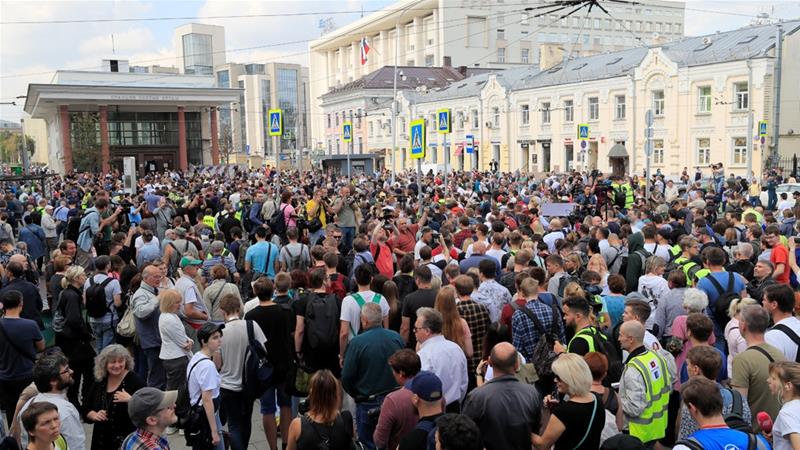 Alexandra Rossius, 23, who joined the march on Saturday said that if the protests were to stop, then “there will be no hope left at all.” “We must show the authorities we are not just going to give up and accept the fact that innocent people are being jailed and elections are being stolen,” she said. Artyom, a 16-year-old school student, said it was “indignation and fear” that brought him to the rally. “I do not want … to have my legs broken, to be killed, to be thrown in prison,” he said.

“The authorities are refusing to compromise, they have started dispersing people, throwing them in jail. I think this is unacceptable.” The march was noticeably calmer than previous similar protests, when police blocked the crowd and made thousands of sometimes violent arrests. “There are thousands of protesters here on the streets, during this rally, which [has not been] authorised by the authorities, and surprisingly, the police stood back for most of the time,” Al Jazeera’s Step Vaessen reported from Moscow.  “But the [police forces] arrived, and they asked people to move,” she added.

In the past, the Moscow polls have generated little public interest. But this summer they have spiralled into a political crisis.

Why does Russia say protests are illegal?

Authorities have launched a wide-ranging probe into “unrest” which could lead to long prison sentences for a number of suspects and have made thousands of arrests. Many of the candidates were also told the signatures they gathered to qualify, in the upcoming election, were invalid, with Putin alleging they were “falsifications.” “Election committees found that their (signature) lists had … people who had died long ago,” he said last week. But opposition candidates, such as politician Ilya Yashin, hit back and accused Putin of lying.

Yashin appealed this week at Russian Supreme Court to have his candidacy reinstated, but lost and was detained the next day, for the fifth time since July for violating rules on public gatherings. As he enters his third decade in power, Putin’s approval ratings have dropped significantly and critics say the authorities fear any outlet calling for wider political change. Putin spoke publicly about the movement for the first time during a visit to France last week, vowing to prevent the emergence of any mass demonstrations in Moscow such as the “yellow vest” anti-government protests that erupted in France late last year.