More than 3 million women who believe they have been left thousands of pounds out of pocket after steep increases to the state pension age are being promised compensation by Labour as part of a £58bn scheme designed to end a “historic injustice”. In the party’s latest major policy announcement, shadow chancellor John McDonnell said that a “debt of honour” was owed to women born in the 1950s who say they were given insufficient notice of big changes to the state pension age. In an interview with the Observer, he said that Labour would introduce a universal scheme that would see the women affected given a maximum payment of £31,300, with an average payment of £15,380 .

“We’re recognising this is a historic injustice that we think we have a debt of honour to address,” McDonnell said. “I think there is a rightful sense of injustice that’s been built up by these women about how they were treated. Most of them felt they had a contract between them and the government on their pension. “They were paying in, they had a set date, the government changed that date, they are not properly informed and for many of them it is too late for them to plan properly for the changes this introduces into their lives. It is about income, of course it is. But often it is about many of them planning to retire, looking forward to looking after their grandchildren, taking them to school and picking up. Many of them have had to go back to work.”

The scheme emerged as the Tories enjoy a 19-point lead in the polls, according to the latest Opinium poll for the Observer. With fewer than three weeks to go until polling day, Boris Johnson’s party has a 47% share of the vote, Labour is on 28% and the Lib Dems on 12%. The Brexit party is now on 3%. On Saturday, Jeremy Corbyn defended his decision to stay neutral in a future referendum on Brexit, saying it was a sign of “strength and maturity” that would allow all voters to trust him to implement the result of the vote. But he faced strong criticism from Lib Dem leader Jo Swinson for his announcement, made on Question Time on Friday evening.

“I think it is quite astonishing,” she said. “Not even just refusing to say now where he stands on remaining or leaving the European Union, but basically saying that he is never going to tell people what he thinks about that. To me, I think that is a total absence of leadership. Remainers in this country need a leader, not a bystander.” The compensation scheme for 1950s-born women fulfils a pledge in Labour’s manifesto, unveiled last week, to “design a system of recompense for the losses and insecurity they have suffered”. Labour says compensation could cost £58bn in total over five years, though some of the costs may be recouped after tax. 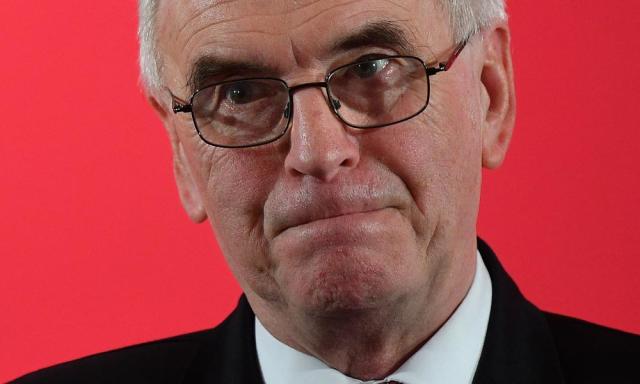 The party is treating the cost as a “contingency” because court action may force whoever forms the next government to pay compensation to the women. McDonnell said the money would be raised “in the appropriate way”. However, it will leave the party open to accusations of another huge increase in spending. Paul Johnson, head of the Institute of Fiscal Studies, has already described Labour’s ambitious spending plans as “colossal”.

Changes in the pension age for women born in the 1950s have already featured in the election, during last week’s televised leader debates. When confronted by a campaigner on the issue during his BBC appearance on Friday, Johnson said that he could not commit to helping them. “It is very expensive to come up with the solution that you want,” he said. “I cannot promise that I can magic up that money for you tonight.”

It comes after a lengthy grassroots campaign waged by the women involved. Demands for compensation have raged since the coalition government decision to accelerate increases in the women’s state pension age from 60 to 65 or 66. The women involved complain they were given little notice and in some cases have had to work years longer than anticipated or have been plunged into poverty.

McDonnell said the party had attempted to devise a plan that could be deployed quickly and form part of its first budget. A scheme costing £58bn would see the women given a basic payment of £100 for every week of pension they have lost out on, with the scheme tapering off for women born between April 1955 and April 1960.

“The thing for me was trying to find a simple scheme to try to get the money into people’s pockets as quickly as possible and address that sense of grievance,” he said. “There will be some who think this is not satisfactory. I think this is the readiest way to do it. We’re dealing with this separate to the overall budgeting process

“The number of Conservative MPs who have been raising it with me as well has been remarkable. All round the country we’ve been meeting women. Even if they’re not in penury because of what has happened, their lifestyles, their hopes in their retirement have been undermined. It’s all classes. It’s a universal injustice.”