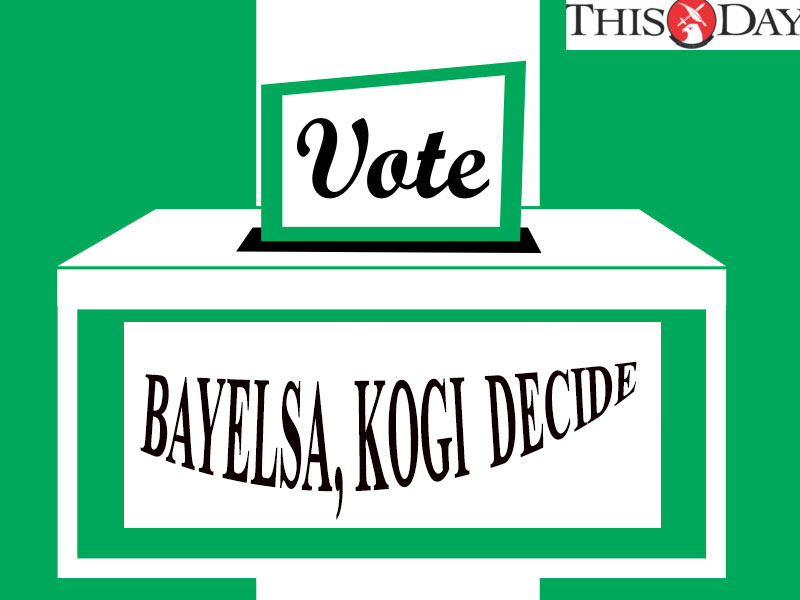 The major takeaway from the just concluded governorship elections in Bayelsa and Kogi States is that stakeholders in the current democratic process do not give a hoot if the system collapses. They would rather have their way and care less if our collective future is sacrificed on the altar of their selfishness and narrow mindedness. The election only took place in two states out of the 36 states of the federation, yet the Independent National Electoral Commission (INEC) found it difficult to organise transparent and credible elections that would satisfy the yearnings of most Nigerians, who see a free and fair election as a sine qua non to good governance.

Election materials always fail to arrive on time at the various polling stations, and when they arrive, some of the voting kits might not be working. Worse still is the fact that INEC has made itself so bias that Nigerians are calling for the replacement of the chairman, Professor Mohamed Yakubu. The so called professor has shown by the 2019 and the just concluded one, that he lacks the capacity to supervise a credible poll.

The Police did not fare any better. The thousands of police deployed to the states by the national command failed to prevent violence from taking place in Kogi and Bayelsa. They instead, looked the other way while thugs and other unwanted persons had a field day manipulating the process against the wishes of the people. Indeed, most election observers and those of us watching it on television, were wondering if there were policemen in those polling units where thugs were busy perpetrating violence.

Of course, as expected, the Inspector General of Police hasn’t found it expedient to address the nation on why his boys went to sleep when innocent voters were being maimed and killed while exercising their civic duty. Maybe, just maybe, he will find the courage to explain to Nigerians what actually happened and what the Force is doing to ensure that in the future, they would provide a level playing field to all political parties.

In a corollary is the implicit approval given to the agencies responsible for organising elections by those in authority, that they are free to manipulate the process in favour of the ruling party. The rush by the presidency to congratulate the governor of Kogi State, Mr. Yahaya Bello, when most election observers had called for the cancellation of the election, is not only disturbing, but an embarrassment to lovers of democracy. And expectedly, the so called winners have made the proverbial trip to Aso rock to pay homage to the king, for making it possible. It’s sad and shameful!

It was in this same country that a gentleman called, Goodluck Jonathan, went out of his way and against the strong resistance of his party, to appoint Professor Attahiru Jega to take over from the much discredited, Professor Maurice Iwu, not minding the robust credentials and integrity of the Bayero University Professor of Political Science. Jonathan was to later become the major victim of Jega’s no-nonsense and uncompromising attitude when he lost the 2015 presidential poll, an election conducted by Jega.

It was to the eternal credit of Jonathan that he accepted the result and congratulated Buhari, thereby saving the nation undue tension and possible crisis. Thank goodness that Jonathan’s altruistic gesture has brought him the much needed global recognition and respect.

On the contrary, what we saw in Kogi and Bayelsa is the desperation of politicians who are ready to hang on to power at all cost, even when they are not popular and therefore do not deserve to be elected. Hence, the danger of keeping quiet while these rapacious characters rampage the terrain, is that good governance and performance would no longer matter in elections; it would mean that once you have the police, INEC and other relevant bodies in your pocket, the electorate no longer matter. It would only get worse as we approach 2023. Needless to note that we still have election next year in Edo and Ondo states. And Anambra would follow before the general elections.

I have always argued that the unholy trinity between the ruling party, Police and INEC have been the bane of our failure to conduct credible and transparent elections in this country. The Peoples Democratic Party (PDP) was the chief culprit of this for many years before they lost to the All Progressive Party (APC) in 2015. Clearly, the APC has been operating the same template and our democracy has been the worse for it. Or how does one explain the spurious N10b ‘grant’ given to Yahaya Bello by the federal government barely 48 hours to election?

For sure, it would be difficult to have a totally free and fair election. There is no flawless election anywhere in the world. But the minimum demand is that Nigerians should be free to exercise their right to vote without fear or favour. The way forward therefore, is for those responsible to make this possible. President Muhammadu Buhari should make this part of the legacy to bequeath to the country when his term ends in 2023.

As we have seen all over the world, democracy is never a destination, it’s indeed a journey. But the stakeholders must make conscious efforts to see elections as a competition among parties and not an avenue to cause mayhem or create atmosphere of fear. Election disruption offenders must be arrested and prosecuted to serve as a deterrent to others and the National Assembly should be more interested in churning out laws that would protect our democracy. To me, that should be a priority going forward, because we must avoid a situation where our people would lose faith in the ballot box.

More importantly, the judiciary should rise up and assert itself. The arm that Alexander Hamilton described as the least form of government has the constitutional responsibility to save our fragile democracy. And though a co-equal arm of government, the judiciary in my opinion, has not lived up to the expectations of Nigerians. Thus, it has a historical responsibility to help to reinvent the democratic process.