Saudi Arabia has sentenced five people to death for the murder of journalist Jamal Khashoggi but cleared a former top adviser to Crown Prince Mohammed bin Salman, a public prosecutor said Monday. There was no evidence against Saud al-Qahtani, Saudi Deputy Public Prosecutor Shaalan al-Shaalan announced in a televised press conference Monday. A court also dismissed charges against Ahmed al-Assiri, a former deputy intelligence chief, and Mohammed al-Otaibi, Saudi’s consul general in Istanbul when the murder took place, he said. Al-Qahtani and al-Otaibi were sanctioned a year ago by the US Treasury for their alleged involvement in the murder. Both al-Qahtani and al-Assiri were part of Crown Prince Mohammed bin Salman’s inner circle and were relieved of their duties in the immediate aftermath of Khashoggi’s killing in October 2018. “Saud al-Qahtani was questioned by the public prosecution and was not charged because there was no evidence against him,” al-Shaalan said. Reading preliminary rulings for 11 people who have been investigated by Saudi Arabia, al-Shaalan said five others who took part in the murder had been sentenced to death. Another three people face a total of 24 years in prison for covering up the murder and violating regulations. He did not reveal any of their names. 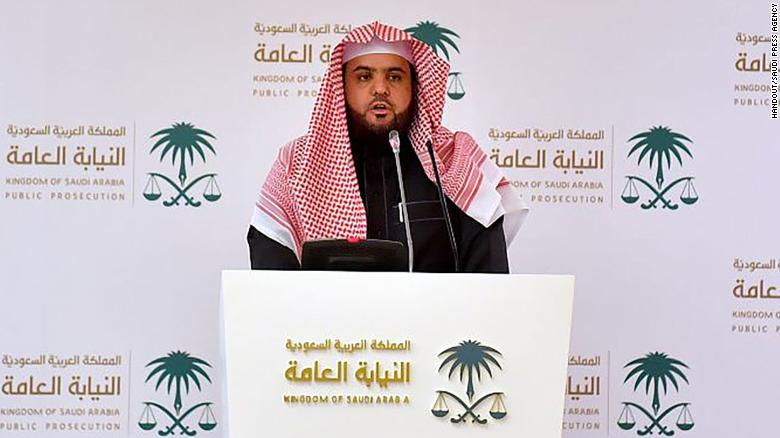 Saudi Deputy Public Prosecutor and spokesman Shalaan al-Shalaan gives a statement in Riyadh.
Khashoggi — a Washington Post columnist and royal insider-turned-critic — was last seen entering the Saudi consulate in Istanbul on October 2, 2018. He had expected to collect documents for his upcoming wedding but was instead killed and allegedly dismembered in the building. His remains are yet to be found.

Verdict slammed as ‘a mockery’

The murder drew international condemnation and the CIA concluded that bin Salman personally ordered the killing. Riyadh’s version of events on October 2 have repeatedly shifted as new details have emerged but it has always maintained that neither bin Salman nor his father King Salman knew of the operation to target Khashoggi. US officials, however, have said such a mission — including 15 men sent from the Kingdom — could not have been carried out without the authorization of bin Salman.
Khashoggi’s son Salah described the ruling as “fair” on Twitter Monday. “A fair judiciary is based on 2 principles: justice and quick proceedings. Today’s judiciary was fair to us, the sons of Jamal Khashoggi,” wrote Salah, Khashoggi’s eldest son who handles the family’s relations with the government. “We affirm our confidence in Saudi judiciary on all its levels as it ruled in our favor and achieved justice.” Earlier this year, Salah took to Twitter to deny that a settlement had been reached between his family and the Saudi government after a source told CNN that Khashoggi’s family have received millions of US dollars in cash and assets as compensation for the killing. But Hatice Cengiz, Khashoggi’s fiancée, said the Saudi announcement was “not acceptable.” In a post on Twitter on Monday, Cengiz wrote that she would never forget Khashoggi, nor his “murderers” or “those who are trying to cover up” his murder.
The Washington Post’s publisher, Fred Ryan, also condemned the findings. “The complete lack of transparency and the Saudi government’s refusal to cooperate with independent investigators suggests that this was merely a sham trial,” he said in a statement. “Those ultimately responsible, at the highest level of the Saudi government, continue to escape responsibility for the brutal murder of Jamal Khashoggi.” UN Special Rapporteur Agnes Callamard called Monday’s court rulings “anything but justice” in a series of posts on her official Twitter account. The UN expert previously found “sufficient credible evidence” that called for the Saudi Crown Prince to be investigated.
Callamard criticized the court’s conclusion that the killing was not premeditated, citing “the presence of a forensic doctor,” how the “defendants had repeatedly stated they were obeying orders” and how the consul general “took all necessary precautions to ensure there will be no eye witness present.” She added: “Bottom line: the hit-men are guilty, sentenced to death. The masterminds not only walk free. They have barely been touched by the investigation and the trial. That is the antithesis of Justice. It is a mockery.” Amnesty International blasted Monday’s verdict as “a whitewash” and accused Saudi officials of failing the slain journalist and his family. “This verdict … brings neither justice nor the truth for Jamal Khashoggi and his loved ones. The trial has been closed to the public and to independent monitors, with no information available as to how the investigation was carried out,” Lynn Maalouf, Amnesty International’s Middle East Research Director, said in a statement. “The verdict fails to address the Saudi authorities’ involvement in this devastating crime or clarify the location of Jamal Khashoggi’s remains,” Maalouf added. Turkey also said the Saudi findings left many unanswered questions. 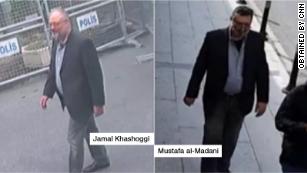 Surveillance footage shows Saudi ‘body double’ in Khashoggi’s clothes after he was killed, Turkish source says
In a written statement, Turkish foreign ministry spokesperson Hami Aksoy said the verdict was disappointing as “important aspects of the murder remain in the dark.”
“The fact that the departed Khashoggi’s remains are still unaccounted for and the identity of the instigators as well as the local collaborators, if there were any, have still not been determined is a fundamental deficiency in the interest of serving justice and accountability,” the statement said. “It is not just a legal necessity but also moral responsibility and obligation that light is shed on this murder committed on our soil and all those responsible are punished,” Aksoy added. Aksoy also renewed Ankara’s demand for judicial cooperation from Saudi authorities. Meanwhile, British Foreign Secretary Dominic Raab said in a statement: “The killing of Jamal Khashoggi was a terrible crime. Mr. Khashoggi’s family deserve to see justice done for his brutal murder. Saudi Arabia must ensure all of those responsible are held to account and that such an atrocity can never happen again.” He added: “The UK condemns the use of the death penalty in all circumstances as a matter of principle.”(CNN)