Two sisters, who were joined in the chest and abdomen, have been successfully separated in a surgery by a 78-member team in Nigeria’s capital, Abuja. Mercy and Goodness Ede are now well enough to go home six weeks after surgery, according to pediatric surgeon Emmanuel Ameh, who led the team that performed the operation at the National Hospital. The surgery to separate the twins happened in November last year but details have only just been released by the hospital, because they wanted to ensure there were no post surgery complications. The girls are the first to be successfully separated at the government-run specialist center, National Hospital spokesman Dr. Tayo Haastrup said. 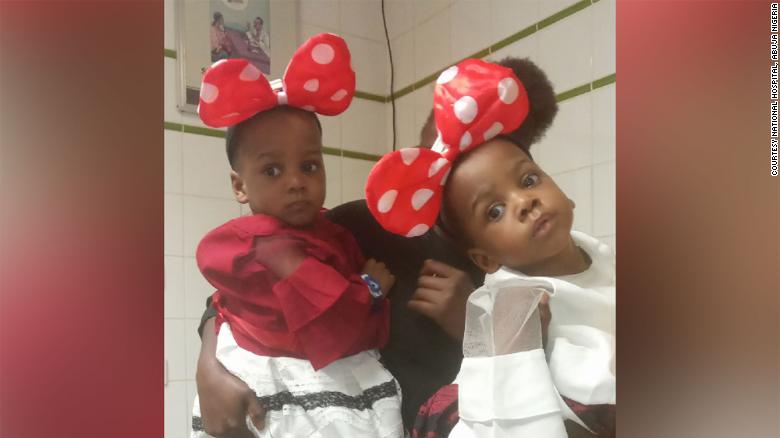 The girls after the operation in December
It took around 13 hours for the team working from two operating theaters at the hospital to separate the twins, according to the hospital. “We are just happy and proud that the team that worked on this surgery were all Nigerians. It was done in Nigeria and the parents didn’t have to go outside the country,” Haastrup said. Haastrup said the surgery, which runs into thousands of dollars, was done free of charge to the parents, who work in menial jobs and would not have been able to afford the surgery.

The twins were born on August 13 last year but Ameh said the surgery was delayed until November because of some complications. Separating conjoined twins is a complicated and dangerous procedure, and not all twins — because of shared organs or other complications — can be separated. Aside from being joined at the chest, the Martins twins were born with a condition known as omphalocele, a birth defect that left a section of their intestine sticking outside their navel, Ameh told CNN. Ameh said the girls underwent surgery to repair the area that had been torn open at the navel and doctors had to wait for many weeks for them to recover from the procedure.
They also had to manage a number of complications in the months leading up to the separation in November.
Some members of the team that performed the surgery Ameh said plastic surgeons on the team were worried that a large section of the girls’ chest would be open and at risk of being infected once they were separated and they had to create artificial skin large enough to cover the area, which took several weeks. “We needed to determine if they could live independently when they are separated. We found out that they were sharing a diaphragm and one liver was serving both of them, but all other organs were separate,” Ameh told CNN. “We also had to get some medical equipment that were not available,” he added. According to a 2017 paper in the journal of Clinical Anatomy, conjoined twins are extremely rare, with an incidence of 1 in 50,000 births. However, because around 60% of those cases are stillborn, the actual incidence rate is closer to 1 in 200,000 births, according to the study. About 70% of them are female. (CNN)
News