Impeachment: Trump wants Senate trial over before State of the Union address

Donald Trump wants his impeachment trial to end before his state of the union address in just two weeks’ time, Lindsey Graham said on Sunday. That timeline is ambitious, given overwhelming public support for a fair airing of the charges against Trump at his Senate trial, in which opening arguments will be heard on Tuesday. Graham conceded that a swift dismissal of the charges, which he had hoped for, will not be possible. The trial could include testimony from top Trump advisers with firsthand knowledge of his alleged attempts to pressure Ukraine to investigate his political rivals. But the White House has indicated that Trump would invoke executive privilege to prevent such advisers from testifying, setting up a court fight that could drag the trial out for weeks or longer.

“The sooner this is over the better for the country,” Graham insisted. On Saturday evening, House Democrats and the Trump legal team outlined their approaches to the trial. The House impeachment managers, who will act as prosecutors, declared the president must be removed for putting his political career ahead of the public trust and seeking to hide that betrayal from Congress and the American people. The seven managers led by intelligence committee chair Adam Schiff published a 46-page tiral brief. A 61-page “statement of material facts” was attached. In a much slimmer filing, the White House replied to a congressional writ of summons notifying Trump of the charges against him and inviting him to attend the trial. The six-page White House filing was a work of blanket denial, stating: “President Trump categorically and unequivocally denies each and every allegation in both articles of impeachment.”

Signed by White House counsel Pat Cipollone and by Jay Sekulow, a personal lawyer to Trump, it also charged the Democrats with “a brazen and unlawful attempt to overturn the results of the 2016 election and interfere with the 2020 election, now just months away”. Speaking to ABC’s This Week on Sunday, Schiff noted that the White House did not attempt to rebut the case on its facts. “It’s surprising in that it really doesn’t offer much new beyond the failed arguments we heard in the House,” he said. “The facts aren’t seriously contested.”

The battle lines roughly plotted by the two documents will be engaged in earnest on Tuesday, when the House managers are expected to begin making their case against the president. A two-thirds majority of senators would be required to remove Trump from office. That is vastly unlikely, given a Republican party aligned behind the president and a Senate leadership openly in lockstep with the White House.

Trump must be removed, Democrats argue, owing to the egregiousness of his past misconduct and his ongoing efforts to encourage foreign tampering in US elections. “President Trump’s continuing presence in office undermines the integrity of our democratic processes and endangers our national security,” the managers wrote. “President Trump’s abuse of power requires his conviction and removal from office.” On Sunday Alan Dershowitz, the controversial Harvard law professor who has joined Trump’s legal team, argued on CNN that the charges against the president were not impeachable because abuse of power does not constitute a “high crime and misdemeanor” as stipulated in the US constitution as grounds for impeachment.

That view is an extreme outlier among legal scholars, but it is not the only time that Dershowitz, who formerly represented OJ Simpson and the convicted sex offender Jeffrey Epstein, has gone against his colleagues. Dershowitz denied that his past representation of and friendship with Epstein could “backfire” in the impeachment trial, besmirching the president’s defense in the eyes particularly of women in Senate and beyond. “They understand that it’s pure McCarthyism to hold a lawyer responsible for having represented controversial clients,” he said. Republicans have never attempted to mount a point-for-point rebuttal of evidence amassed by Democrats that Trump mounted a months-long effort to extract announcements from Ukraine that Trump thought could damage Joe Biden, his political rival. Evidence indicates that the effort derailed the career of a respected US ambassador at the wishes of corrupt Ukrainian elements, potentially threatening her personal security; used the promise of a White House meeting to extract the “deliverable” Trump wanted; and escalated to the suspension by Trump of security aid for Ukraine appropriated by Congress. 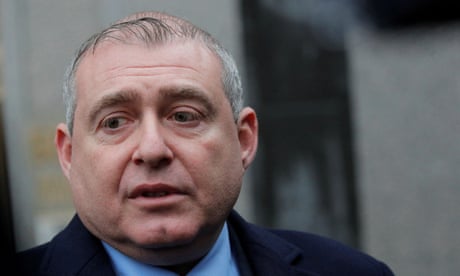 Identifying himself as the “personal counsel to President Trump”, Giuliani sought a meeting with Ukrainian president-elect Volodymyr Zelenskiy in May 2019, according to Parnas evidence cited in the briefing. “President Trump has betrayed the American people and the ideals on which the nation was founded,” the Democratic briefing concluded. “Unless he is removed from office, he will continue to endanger our national security, jeopardize the integrity of our elections, and undermine our core constitutional principles.”

… we’re asking readers, like you, to make a new year contribution in support of the Guardian’s open, independent journalism. This has been a turbulent decade across the world – protest, populism, mass migration and the escalating climate crisis. The Guardian has been in every corner of the globe, reporting with tenacity, rigour and authority on the most critical events of our lifetimes. At a time when factual information is both scarcer and more essential than ever, we believe that each of us deserves access to accurate reporting with integrity at its heart.

More people than ever before are reading and supporting our journalism, in more than 180 countries around the world. And this is only possible because we made a different choice: to keep our reporting open for all, regardless of where they live or what they can afford to pay.

We have upheld our editorial independence in the face of the disintegration of traditional media – with social platforms giving rise to misinformation, the seemingly unstoppable rise of big tech and independent voices being squashed by commercial ownership. The Guardian’s independence means we can set our own agenda and voice our own opinions. Our journalism is free from commercial and political bias – never influenced by billionaire owners or shareholders. This makes us different. It means we can challenge the powerful without fear and give a voice to those less heard.

None of this would have been attainable without our readers’ generosity – your financial support has meant we can keep investigating, disentangling and interrogating. It has protected our independence, which has never been so critical. We are so grateful.

As we enter a new decade, we need your support so we can keep delivering quality journalism that’s open and independent. And that is here for the long term. Every reader contribution, however big or small, is so valuable. (The Guardian)