Demonstrators in the capital and several southern cities blockade major roads as anti-government rallies intensify. Two Iraqi protesters were killed on Monday in Baghdad’s Tayaran Square after security forces fired live ammunition and tear gas as angry demonstrators took to the streets in force.  One protester was shot by a live round in the head while the second was hit by a tear gas canister, security sources said. Both succumbed to their wounds at the hospital. Dozens of people were also wounded. The Iraqi government did not confirm the deaths. Al Jazeera’s Osama Bin Javaid, reporting from the Baghdad demonstration, said activists took video showing seriously wounded protesters being carried away after the fierce clashes.

The violence came as security forces tried to clear roads in Iraq‘s capital after hundreds of protesters took to the streets to express their anger at the embattled government’s slow pace of reforms. Demonstrators a week ago gave the government until Monday to act on their demands, which include the holding of a snap poll under a new electoral law, the appointment of an independent prime minister and the prosecution of officials suspected of corruption. The UN envoy to Iraq urged Iraqi political elites to resume pushing for reforms and for protests to remain peaceful. “Any steps taken so far to address the people’s concerns will remain hollow if they are not completed,” said Jeanine Hennis-Plasschaert in a statement issued by the UN. “Violent suppression of peaceful protesters is intolerable and must be avoided at all costs.” Starting Sunday and continuing on Monday, young demonstrators in Baghdad and the south began sealing off highways and bridges with burning tyres.

“We blocked the road to demand our rights … the rights of young people to get a job,” said one of the protesters in the capital, who asked to remain anonymous.  “We demand the central government go to early elections and the nomination of a new independent prime minister. If that doesn’t happen, we will escalate and block all the highways and centres of the city.”

Another demonstrator decried the violent tactics used by security forces to disperse the crowds. “For months no one has listened to our demands. They are killing us. It’s just bloodshed,” protester Hassan Ali told Al Jazeera. Three-wheeled taxis rescued tear gas victims and brought them to makeshift hospitals near the demonstrations.   Medics at the scene treated dozens of people who suffered from the effects of tear gas.  Jamal, a medic in Baghdad, told Al Jazeera: “We went to Tayaran Square in Baghdad. People wanted me to help them, I was also attacked by tear gas. I fell down as the security forces were using tear gas and live ammunition.” A statement from the Baghdad Operations Command said 14 officers were wounded by a group of rock-throwing “inciters of violence ” while trying to secure the entrance to Tahrir Square, the epicentre of the protest movement. “Despite these actions our forces continued to exercise restraint and follow up on the security duties assigned to them,” it said. A security official said at least nine arrests were made after the National Security Council authorised security forces to detain demonstrators blocking main thoroughfares and roundabouts.

Protests also broke out in southern Iraq, including in the cities of Nasiriya, Karbala and Amara, where demonstrators burned tyres and blocked roads. In the southern city of Nasiriya, protesters blocked the highway linking the city to the southern oil-rich province of Basra. At least six protesters were wounded when an unknown gunmen fired at them from a speeding car, a medical official said.

The call for action by protest organisers came amid fears that spiralling regional tensions in the wake of top Iranian military commander Qassem Soleimani’s assassination by the United States in early January would put an end to the momentum of their months-long movement.  The uprising began on October 1 when thousands of Iraqis took to the streets to decry rampant government corruption, poor public services, and a scarcity of jobs. Protesters are also demanding an end to Iraq’s quota-based political system, introduced after the US-led invasion in 2003. Hundreds of people have been killed since the protests first erupted, with rights groups accusing security forces of using excessive force against the demonstrators. “They should stop shooting and aiming, who are they and who we are? Both sides are Iraqis. So why are you killing your brothers?” said one woman who did not give her name. Prime Minister Adel Abdul Mahdi resigned nearly two months ago, but political parties so far have failed to agree on a successor and he has continued to run the government as a caretaker. Demonstrators have publicly rejected the names circulating as possible replacements and are furious that other sweeping reform measures have not been implemented. 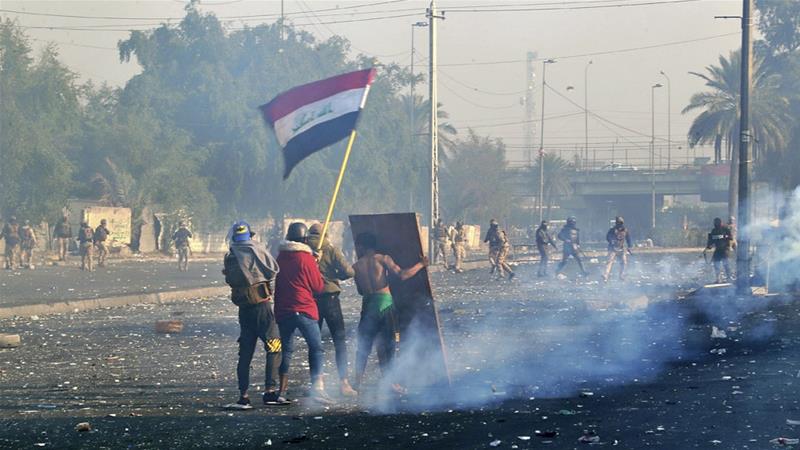