Bishop dies of covid 19 on Easter

A PASTOR who said that God is “larger” than the coronavirus has died of complications from the disease. Bishop Gerald Glenn, a leader at New Deliverance Evangelistic Church in Richmond, Virginia, died on Saturday evening, just days after testing positive for COVID-19. Mar-Gerie Crawley, Glenn’s daughter, said her father had diverticulitis, which inflames the intestines, and so it was not unusual for him to have fevers. However his health worsened last Sunday and he began struggling to breathe, and so was admitted to hospital, where his breathing improved once he was treated with a ventilator.

“They did the COVID-19 test on him and we got it back that day and it was positive,”  On March 22, before he had been diagnosed, Glenn told a congregation: “I firmly believe that God is larger than this dreaded virus.”

Just one day later, the state had banned gatherings of 10 or more people, but officials had already been urging the public to practise social distancing. Crawley is now keen to spread the message that everyone should stay home. “It becomes very real to you,” she said. “I just beg people to understand the severity and the seriousness of this, because people are saying it’s not just about us, it’s about everyone around us.” Glenn’s wife, Marcietia, has also tested positive for the virus. State officials across the country have been cracking down on worshippers attending church over the Easter weekend.

In Kentucky, state police are recording the license plate numbers of any rule-breaker’s vehicle seen at church gatherings. Churchgoers will face 14 days of quarantine if they flout Governor Andy Beshear’s lockdown rules. The politician announced 185 new cases of Covid-19 in Kentucky on Saturday, bumping up the state’s total to nearly 1,900 cases. In Mississippi parishioners have been fined $500 for attending a drive-in service.

President Donald Trump cautioned Americans to keep apart on Easter Sunday as some US churches plan to defy states’ lockdown orders. The president acknowledged that this year’s holiday “will be much different than others” because of the coronavirus outbreak in a video posted to his Twitter account Sunday morning. He urged Americans to continue practicing social distancing to “get rid of the plague.” The US on Saturday overtook Italy for the most coronavirus deaths reported worldwide. On Friday, there were 2,000 deaths in the US in just 24 hours. There are now at least 530,830 confirmed cases in the country, and 20,614 deaths.

CORONAVIRUS has wiped out a mom’s entire family, leaving her with “unimaginable pain”.

Cassandra Brown, 60, from Michigan lost both her husband of 35 years, Freddie Brown Jr, and their only child, Freddie Brown III, to Covid-19 within just three days.

Their son, 20, had been fearful he would pass away while battling the disease in intensive care, reports The Detroit News. So Cassandra tried to reassure him by reading from the Bible, as she spoke to him via FaceTime. The mom also sang to the frightened young man – who was in hospital hours after his dad died – in a bid to help him relax and fall asleep. But, tragically, despite her best efforts, Freddie later died in hospital. She said: “There’s not even a word to describe my pain. It’s unimaginable.” The Detroit News points out that because of the infectious disease, Cassandra was cruelly unable to be near either her husband or their boy when they passed away.  On a public Facebook page for Flint in Michigan, a poignant video of the funeral service was shared with family and friends who couldn’t attend.

Bria Jones commented: “Sandy Brown envisioned a funeral fit for kings, but coronavirus took that away from her. “Practising social distancing she held a private visitation for her husband and son who lost their battles with the disease. “She invited the world through social media. Please continue to pray for Mrs Brown.” Rosemary Garrett replied: “So sorry for your loss. Praying God will provide you with the comfort strength and support needed through this difficult time.” In the obituary for the elder Freddie, who died on March 26, aged 59, Cassandra said he had been nicknamed “Lucky” by her father-in-law. He had “noted the coincidental numbers around his birth on July 11, 1960, weighing 7lbs. 11oz. at 7.11am” in Flint. 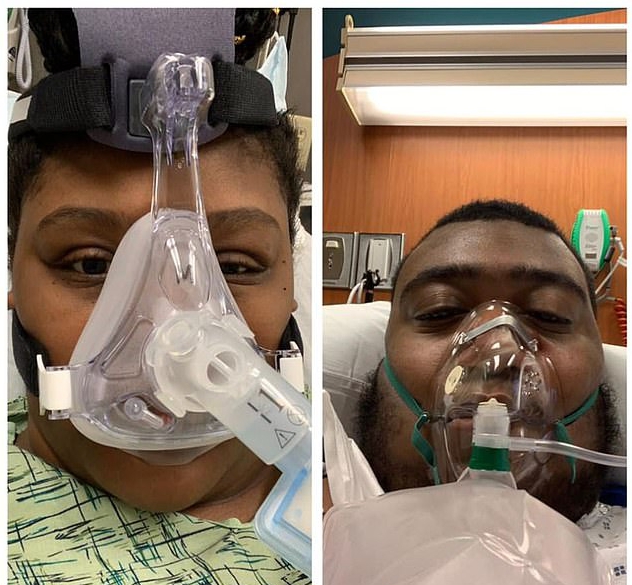 “Lucky was a great athlete; basketball, softball, baseball you name it he played it.  “He played on many Intramural Championship basketball teams.  “Lucky worked for Meijer Thrifty Acres as a produce clerk and retired after 32 years of dedicated service.  “He would always greet you with a smile. Lucky loved people and was an unconditional giver,” it adds. Cassandra described him as “her honey – the most loving and caring man she’d ever met”.

Lucky and ‘Sandy’ gave birth to their “Miracle Baby”, Freddie “Boopie” Brown III. But on March 29, Freddie Brown III also died. His heartbreaking obituary says that he “emerged into this world with his face beet red”. This was attributed to his mom’s liking for “red foods” during her pregnancy as Cassandra enjoyed “spaghetti, taco sauce, watermelon, you name it she ate it.” He was dubbed “Redd” as a result. Freddie Brown III was a miracle baby for the couple, because it took “15 long years” for Cassandra to conceive. He had been “excited about going to Michigan State this fall” so he could play football, and he had dreams of playing in the NFL.

“My mom and I were devastated when my dad passed. We were loving on and taking care of each other,” his obituary adds. On April 9, Michigan Gov. Gretchen Whitmer signed an executive order extending her “Stay Home, Stay Safe” order through to the end of April, limiting gatherings and travel. “Michigan has the third highest number of Covid-19 cases in the country, and we’re still on the upswing.  “We must continue to do everything we can to slow the spread and protect our families,” said Gov. Whitmer. According to the Michigan Department of Health, the state has about 24,000 coronavirus cases, and about 1,400 deaths. (Sun)