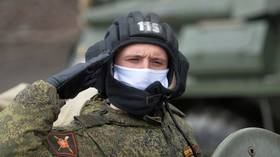 Holding planned commemorations of the 75th anniversary of Soviet Russia’s World War Two victory over Nazi Germany, across the country, would be too risky with Covid-19 spreading nationwide, President Vladimir Putin has said.

As a result, he has postponed the events until after the current coronavirus crisis has eased. The celebrations on May 9 were expected to be a major date in Russia, with military parades and other public gatherings planned throughout the country, and world leaders set to descend on Moscow.

However, proceeding under the cloud of coronavirus would be too great a risk to public health, Putin acknowledged on Thursday.

“The coronavirus-related risks do not give me the right to be preparing for the [V-Day] celebrations,” Putin said, at the beginning of the Russian Security Council meeting.

He added that he’s instructing the Defense Minister and local authorities to “postpone preparations for the military parade on Red Square and regional parades.”

While giving no new date for V-Day celebrations, the president gave an assurance that they will take place this year.

We will certainly hold all the events planned for May 9 during 2020… There will be the main parade on Moscow’s Red Square and the Immortal Regiment march. They will certainly happen.

Putin’s move came the day after veterans’ groups asked for the Moscow parade to rescheduled. All of Russia’s surviving WW2 heroes are now over 90-years-old, and in the demographic most vulnerable to Covid-19.