…Security should be beefed up — Imo monarch chairman

Apex Igbo socio-cultural organisation, Ohanaeze Ndigbo and traditional rulers in Anambra, Imo and Abia States, yesterday raised the alarm over the increasing number of youths from the northern parts of the country, popularly known as Almajirai, being dumped in the South East, calling on governors in the zone to take a serious stand on the issue without further delay. Speaking with Vanguard, Ohanaeze Ndigbo rejected the ferrying of Northern youths and Almajirai in large numbers to the South East States, saying that their movement was not with good intention. The publicity secretary of Ohanaeze Ndigbo, Prince Uche Achi-Ogbaga wondered why the large number of youths from the North are making their way to the South East especially when interstate boundary movement is banned. “This is the most difficult riddle of the years.

Most of the palliatives have been shifted to the Northern part of the country. While the palliatives were shifted to North, the people from the North are trooping in thousands to the South East and South South. I wonder what they are coming here to do. “And the way the so called Almajerai are loaded in vehicles and lorries are alarming. Who provides the lorry and fuels it? Who organized this because it is an orchestrated organization? It is not just that they saw a lorry on the road and climbed on it. It was a well-organized arrangement and they are being pushed to Southern parts without requisite food to eat. “They push them inside South East and want them to go and earn their living from where? So many of them will turn to criminals and herdsmen and begin to harass people; go to people’s farm, maiming, killing, raping and destroying farm crops and yet, government is encouraging people to go into farming. “When people take the little they have to go to the farm, another person will come there to destroy the farm crops. So, I don’t understand what the Federal Government is doing with the lives of the people. The most important function of the government is welfare of the people. If the welfare of the citizens is not the concern of the government, that government has failed.

“Secondly, government is called to protect the lives and properties of the citizens. You could imagine if the lives and properties are being protected at this time when people die in hundreds of thousands in the hands of herdsmen, criminals and other names they are being called. They are changing the names from herdsmen on daily bases as if they are not the same persons they used to be. “They are miscreants who masquerade as herdsmen, go inside the farms and destroy the food stuff and kill the farmers. This thing is getting out of hand. What have the southerners more especially, the South East done to the people? “Anything other states are getting from the federal government, south east will not be included. It was last December that they closed down the Akanu Ibiam International Airport which was the only international Airport in the South East and up till now has not started functioning. “But you can see that what they see as disadvantage has turned to be advantage because if the Airport has been functional, many people from overseas, Lagos, Abuja who were affected by the coronavirus would have filled up the zone. Because that one couldn’t work out for them, they now want to flood people from the sea and road to make sure that south east is ravaged by the virus.

“It is unfortunate that this thing is happening to us and I wonder what our people are doing. We have people that are ministers in the federal government who hold one function or the other and this kind of thing is happening in their states and they have no help to render and they have no mouth to speak up. “It is unfortunate that they are just there eating from the crumbs failing down from the table of the people in charge of affairs. I just wonder that those people could be there and allow this kind of ravaging to happen to their people”, Achi-Ogbaga lamented. Situation giving lot of concern — Igwe Achebe In a communique after a meeting in Awka, chairman of Anambra State’s Council of Traditional Rulers and the Obi of Onitsha, Igwe Nnaemeka Achebe, said the influx of Almajirai was giving them a lot of concern. Others who signed the communique include Achebe’s two deputies, the traditional ruler of Okpuno, Igwe Sunday Okafor, and the traditional ruler of Okakwu Odekpe, Igwe Chuma Onyia.

According to the royal fathers, the worrisome aspect of the situation was that many of the   Almajirai might have already been infected with coronavirus disease before being sent to the South East. They urged the governors in the zone   to ensure that the Almajirai were not allowed to enter the states since the Almajirai   would not fit into the zone’s economic, social and cultural environment. The monarchs   particularly called on Governor Willie Obiano   not   to relent in the fight against the long standing menace of some cattle breeders, known as herdsmen in the state. They however, commended the governor for what they described as his exemplary leadership in the fight against COVID 19. “Your prompt establishment of Isolation Centres at Mbaukwu -Umuawulu and other locations in the state, including border closure is exemplary, “ they said. People should respect ban on inter-state movement — Abia monarchs Similarly, the Abia State Council of Traditional Rulers has urged people to respect the ban on inter -state movement to contain the spread of the covid-19 pandemic. 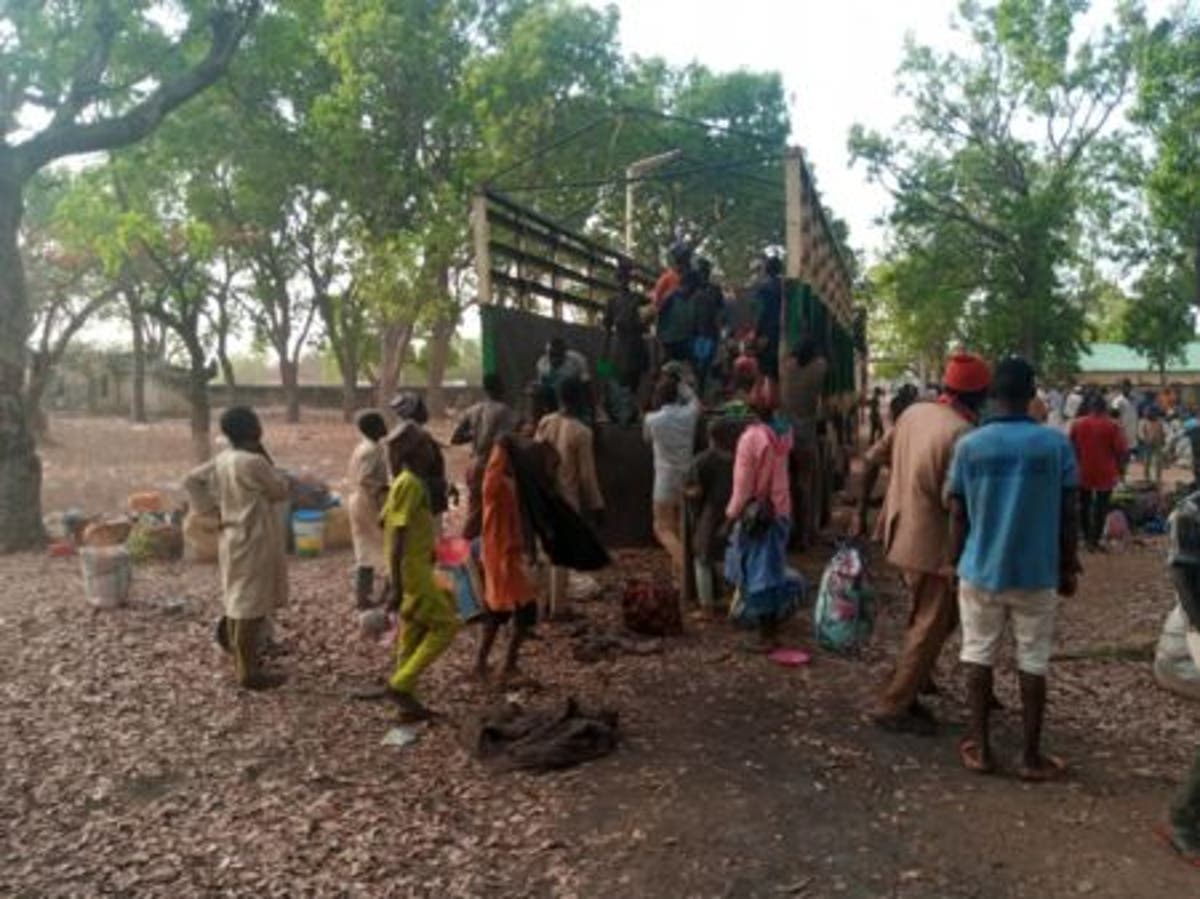 Chairman of the council, Eze James Nwabeke, who condemned the practice of hiding Northern youths and Almajirai in trucks said the practice should be stopped until the pandemic is over, stressing that such practice is evil. “The Federal Government has banned inter -state movement. People should respect the directive until the pandemic is over. The practice of conveying people with cows in trucks and covering them with tarpaulin is evil and laden with sinister motives. We know it is one Nigeria where everyone has the right to move, but it is not in this era of covid-19 pandemic. Anybody who hides while going on a visit is a thief and should be treated as a criminal.”

Security should be beefed up — Imo monarchs Also yesterday, the chairman, Imo State Traditional Rulers Council, Eze Samuel Ohiri,  said that security should be beefed up at the borders of the southeast region to prevent entry into the region from outsiders, inline with the federal government imposed national curfew. He said: “The instruction  came from the federal government and Nigeria Center for Disease Control, NCDC, as one of the ways to curtail the spread of Covid 19 virus. They said that inter state movement should be curtailed. They gave other measures including social distancing and I think that Nigerians should obey these instructions. “And to achieve this, the federal government imposed a curfew, 8pm to 6am and we must obey this order.” When asked if his worry is based on the report that some persons have disobeyed the directives, he said: “Yes, I am worried and it is not just from the North but also from other regions engaging in inter state movement. I think those that should be allowed are people on essential duties and essential goods. “The security agencies should make sure that the directives on stopping inter state movements must be obeyed by everybody except people on essential services.” South East govs should send back Almajirai imported to East — Ezeife  Meantime, a former governor of Anambra State, Dr. Chukwuemeka Ezeife has tasked South East governors to do everything within their reach to ensure that the Almajirai that were taken to the area especially to the South East are sent back.

The former governor said that the Almajirai posed great risk to the South East and might not find it easy to survive and could die of starvation as they do not have any known trade or business to sustain themselves. He wondered how they managed to enter the South East when there was lockdown and closure of boundaries by many state government. Speaking exclusively to Vanguard in Abuja, Dr. Ezeife said: “We have closure of state boundaries, meaning that nobody can go from another state to another. We also have curfew meaning that traveling by night is out of the question, yet people are moving in thousands. “I think it is condemnable. Now I have sympathy for the Almajirai and the youths but they are not responsible for what they are doing, they didn’t hire any vehicle, some people are organizing them and sending them to the South. “This comprehensive corruption that enables people to move to anywhere. No matter the curfew, no matter the blockade, it is very dangerous. Well, let me tell you what I feel. Jesus Christ said we should love our neighbours as our ourselves. “ I should ordinarily love the almajirai if they become my neighbors, but some people were responsible for producing them. Those people who gave no education, no training, nothing to survive with to human beings who they call almajirai should take responsibility and keep the them where they grew up and pay the price for making human beings useless.”