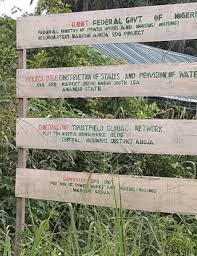 Nnewi is one of the most viable commercial towns in Nigeria. The town arguably has the highest number of industries in the South-East, employing thousands of young Nigerians.

Despite being a town that generates revenue for both the government, corporate and private businesses, Nnewi is still lacking major infrastructures that will position her as a megacity.

These abandoned projects are either those of the government or private individuals.

Since the commencement of the construction of Nnewi Shopping Mall during the administration of former Governor of Anambra State His Excellency Mr Peter Obi, the project has been riddled with many controversies both from the angle of the government and the host community, Nnewi.

The Shopping Mall is situated at the heart of the town, Nkwo Nnewi Triangle, which is one of the communal lands of Nnewi, it is owned by all the four quarters in Nnewi which include: Otolo, Uruagu, Umudim and Nnewichi and remains the meeting point for the people of Nnewi.

The project which was awarded to a Chinese firm at the cost of N3 Billion Naira, in 2013, has been abandoned following different court litigations.

Our Lady of Assumption Cathedral, Nnewi, is the principal church of the Catholic Diocese of Nnewi. For the past Thirteen (13) years, the church which should be the centre of activities of the Diocese has been without a building.

The former building for the Cathedral was pulled down by the then Chief Executive Officer (CEO) of Capital Oil and Gas, Dr. Ifeanyi Ubah, who promised to build what he described as a better edifice befitting of the Cathedral.

Ten (10) years down the line, no major construction works have been done on the site, as the church is still holding mass under a makeshift church. However, Senator Ifeanyi has continued to reassure the Catholic Diocese of Nnewi of his commitment towards ensuring that the project is completed.

Earlier last year, the Management of Nnamdi Azikiwe University Teaching Hospital (NAUTH), Nnewi, announced that medical services will begin at the permanent site of the hospital to decongest the temporary site. Many expressed their shock in the knowledge that most structures in the site are yet to be completed.

The permanent site which is located between Nnewi and Oraifite communities has been under construction for the past Twenty (20) years.

Despite the fact that the hospital has outgrown it’s temporary site, there are no genuine concerns either from the hospital management and the government to complete the existing structures at the permanent site.

This may be a surprise mention, as many are not aware that such a project was conceived and started.

The Construction of Gold Land University, Nnewi, was pioneered by Seven (7) Individuals led by Sir Chukwumeka Nzewi. The project which was projected to cost billions of Naira met her waterloo when the University Host Community, Edoji Village in Uruagu Nnewi, kicked against the project.

The Construction of Gold Land University, Nnewi, which started with the clearing and fencing of the University site was scuttled when ligations began on the ownership of the land.

The inability of the government to complete this Power Sub-station is one of the reasons why Nnewi is yet to fulfil her potential as the industrial hub of the east.

Nnewi 2x60MVA 132kv substation which was awarded at the tune of N251, 833,400:00 onl
y received N191,734,122:52. The project has suffered a huge setback because of inadequate funding. Although the state government tried stepping in, it has been the same old story.

Nnewi power demand is about 45MW. Less than one-third of this is supplied at a very irregular manner, this has made industries and commercial establishments operate solely on generators.

As strange it may sound, Nnewi could have been part of towns in Nigeria that will be privileged to have a Police College.

The federal government under the administration of President Olusegun Obasanjo was said to have approved the building of Nigeria Police College in Nnewi. The building of the college which is located in Ndiakwu Otolo, Nnewi, started with the fencing of the site but was stopped abruptly due to funding.

For the last decade, nothing has been heard of the college. This underscores the wastefulness and poor quality leadership Nigeria is faced with.

This was one of the projects that came with a lot of expectations, the projects were designed to have Three International Stadiums, Sports Academy, International Linguistic School, Biggest Shopping Mall East of Niger, World-Class Night Market, Five Star Hotel, International Conference Center, One Thousand Residential Homes, a Hospital and a Church.

The project which was launched four years ago appears to have been abandoned as no construction works has taken place in the site in the last three (3) years.

Located in the boundary between Umudim and Ozubulu, the Housing Estate was the first Government Reserved Area (GRA) in Nnewi.

Awarded during the administration of Shehu Shagari, but was abandoned in 1983, despite the financial commitment that was made to the project.

Recently, it appears life is coming to the site following the beginning of construction of roads in the estate which was facilitated by Hon. Chris Azubuogu. However, constructions ongoing in the site appears to be at a low pace. Will it be safe to assume that the estate has left the league of abandoned projects in Nnewi?