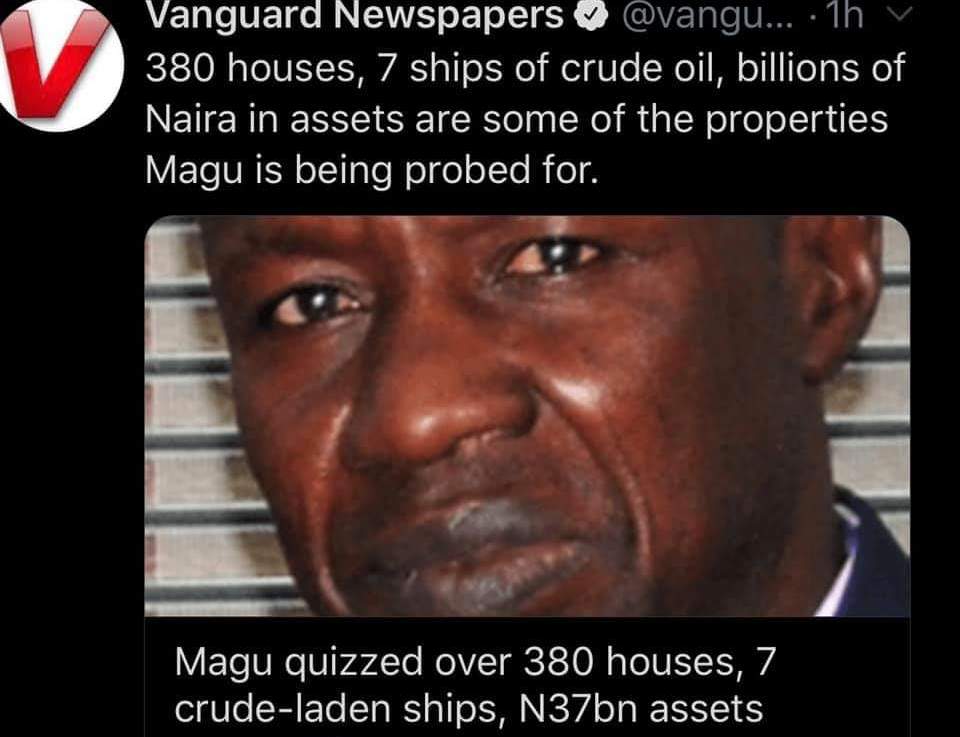 The Economic and Financial Crimes Commission  is  charged with the responsibility of enforcing the provisions of other laws and regulations relating to economic and financial crimes, including:  Money Laundering Act 1995, The Money Laundering (Prohibition) Act 2004, The Advance Fee Fraud and Other Fraud Related Offences Act 1995, The Failed Banks (Recovery of Debts) and Financial Malpractices in Banks Act 1994, The Banks and other Financial Institutions Act 1991; and Miscellaneous Offences Act.

What coincidence both the chairpersons of the commission had one thing common the controversies trailed either their appointments or performances in office? Strangely, they were all alleged to have abused their office with some doses of corrupt practices.   Since the Commission was established, it has had four chairpersons, Malam Nuhu Ribadu (2003 – 2007); Mrs. Farida Waziri (May 2008 – November 23, 2011); Mr. Ibrahim Lamorde (November 23, 2011 – November 9, 2015) Ibrahim Magu was appointed on November 9, 2015.

It will be extremely difficult to make sense of the current anti-corruption crusade led EFCC without looking into the tenures  of other chairman, under whose watch an endless string of financial atrocities was committed and how EFCC’s ex-chiefs were booted out of office.   Both the four Chairperson of the EFCC have one thing in common are being disgraced from the office in issue of lack of transparency in discharging their responsibilities or   fight against corruption mostly the war lost between the office of the Attorney-General of the Federation, and the Economic and Financial Crimes Commission are either in the battle for supremacy. .

The Commission pioneer chairman Malam Nuhu Ribadu   sacked by President Yar’adua and was alleged to have been involved in abuse of human rights of suspects among other things and was not only removed from office but demoted from the rank of Assistant Inspector General of Police to Commissioner of Police.  After Nuhu Ribadu was booted out was clouded by allegations that she was sponsored by ex-governors and she failed to secure convictions for high profile cases involving former governors already instituted by her predecessor. Farida Waziri was sacked by the Former President Jonathan claimed that Farida Waziri was removed from office in the national interest. However, it was also alleged that Waziri might have compromised the investigation into financial misappropriation against a former Governor of Bayelsa State, Timipreye Sylva, and that of former Edo State governor, Lucky Igbinedion.

Ibrahim Lamorde replaced Waziri, as acting chairperson of the EFCC and he became embroiled in controversy in 2015 after the Nigerian Senate alleged that $5bn had gone missing at the EFCC. He was sacked by President Buhari and replaced with Ibrahim Magu. Shortly after his sacked, the Senate Committee on Ethics, Privileges and Public Petitions authorized its Committee on Ethic to issue a warrant of arrest on Lamorde for allegedly misappropriating N1trn during his time as head of the anti-corruption agency.  Ibrahim Magu, the suspended chairperson of the EFCC was first appointed as acting chairman of the commission in November 2015 by President Muhammadu Buhari.  But the upper chamber was refused to confirm Magu twice as chairman of the agency due to “security reports. He is also known to have a public spat with Abubakar Malami, Nigeria’s Attorney-General. On July 6, 2020, Magu was arrested by operatives of the Department of State Services and the Nigeria Police Force and driven to the Presidential Villa where he was made to answer questions on alleged corruption against him.

Even before Magu suspension, he claimed EFCC recoveries of N504,154,184,744.04 but  the actual bank lodgments were N543,511,792,863.47. These inconsistencies cast a serious doubt on the accuracy of figures submitted by the EFCC as its   cannot fully accounted for cash recoveries made by it.  The suspended EFCC boss is expected to disclose the whereabouts of the missing interest funds running into billion of naira as he now facing Justice Ayo Salami (Rtd)/Presidential Investigation Committee which is currently probing allegations against him.

Twice  Presidency forwarded Magu’s name for confirmation which was rejected by the Senate many Nigerians seen the rejection as result of  power tussle between Presidency and the Senate leadership but upper chamber  reliantly   rejected him based  on the reports by Lawal Daura,  former director-general, Department of State Services (DSS). In the DSS report, Magu  was accused of corruption ‎and “gross violation of human rights”. He was also alleged to be in possession “of undeclared pieces of property.

For the government and its anti corruption agencies to   achieve just   and fair fight against corruption and need to make perpetrators of corruption serve as deterrents to others, and anti-corruption agencies require ensuring adequate punishment is meted out to whoever is caught. For the chief executive offices of ICPC, EFCC, CCB, CCT should have a similar passion for the war and to work with other anti-graft agencies whose intend to work and scheme a positive image for the war. While those that are sheep in the wolf skin within the commission are to be sent away.

Both the office Attorney General and Minister of Justice and EFCC are  a very sensitive government agency tasked with the investigation of financial crimes but all the cases brought by Economic and Financial Crimes Commission  are not handled with all diligence and transparency against the alleged corrupt public official as result of battle for supremacy and personal advantage.