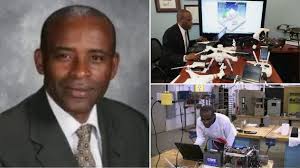 Nigerian astrophysicist, Osatohanmwen Osemwengie, has been identified as the core brilliant brain behind some superlative designs and building of drones for the US military.

The brilliant engineer was brought to the spotlight when he bagged his fourth PhD degree in addition to seven master’s degrees.

Osemwengie is a robotic genius who currently works with the National Aeronautics and Space Administration and has been able to deploy drones to many parts of the world for the US.

In 2008, he was quite a star at that year’s robotics championship. In his interview with the media, he said he and his team are working on a technology called Mars Curiosity Rover which is set to launch in 2020.

Though the Edo state indigene left the country in the early 80s, he has been maintaining a strong tie with his home country.

The Nigerian academic now with seven masters and four PhDs once served as an administrator at the College of Education, Benin.

“Six master degrees, not bad. I was also in the State of Ohio on Monday, December 12th, 2016 for my Masters of Business Administration (MBA) graduation.

The Nigerian genius fondly called Dr. Osato Osemwengie, is a U.S-based Nigerian drone expert. Osemwengie is the founder of the Open Robotics University; a tuition free engineering degree-granting university that allows people to further exercise their talents and expand their knowledge into all fields related to engineering.

The university, which was created in collaboration with Google+, awards bachelor, masters, doctorate degrees in the robotics field.