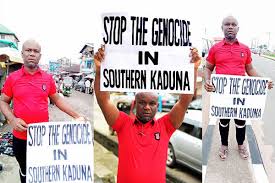 The Chairman Board of Trustees Southern Kaduna Christans Elders Forum and Overseer, Vision Pioneer Throneroom (Trust) Ministry, Kafanchan, Apostle Dr. Emmanuel Nuhu Kure has warned that the Federal Government should arrest the senseless bloodshed going on in Southern Kaduna before it lead to revolution.

The cleric who gave the warning in an interview during the grand finale prayers and indoor protest sessions on Southern Kaduna killing at Ecwa Goodnews Church in Kaduna, noted that the situation, if not stopped now, may lead to revolution.

“A situation when people will be force to come out and defend themselves against the armed Militia, occurred ceaselessly may come”, he stated.

Kure lamented that despite the presence of special armed forces deployed to the area by the Federal Government, the bloody attacks in the Communities remained unabated, is unfair.

” I want the Federal Government and all leaders to look at this problem in the eye and face the reality. I want to warn now also, that the Southern Kaduna is waiting for an explosion that would bring people out in a mass protest,”

“For the first time in my life I want to tell the Fulanis that you have gotten your vengeance, leave the Southern Kaduna people alone, they are already pained”, he said.

He also said that even though the Fulanis are victims of their illiterate leaders “the Fulanis don’t have leaders; if they have, they should have done something to stop the bloodshed in Southern Kaduna”.

“I want to challenge the Fulani leaders to find solution to this problems. Let them meet with their literate leaders and not the illiterate ones. I think the old negotiation under the colonial era has becomes archaic. We have to make them understand that all Nigerians, and other ethnic groups have a right in Nigeria as a nation to leave”, he said.
The leading Nigerian cleric argued that the problem in Southern Kaduna has gone beyond negotiation, pointting out that “A peace meeting held without inviting those people who’s relations were killed, make no much sense”.

He also warned President Mohammadu Buhari and other Politicians to stop speaking for the Fulani if they’re serious in resolving the age long problems in Southern Kaduna crisis, North West Nigeria.

Apostle Kure who is also the National Secretary Pentecostal Fellowship of Nigeria (PFN) lamented that “it is unfortunate that those in Government who are engaged on peace talk in Kaduna are doing so for reward motives, lam insisting that they are presently doing all the talks because they have interest”.

“They have reward after organising such peace talks either because the Government will remember them tomorrow, therefore, there is no way that kind of person will not be biass”, Kure stated.

Kure suggested for a national conversation where Nigerians can talk to each other, saying “Nigeria must begin to talk back again, whatever name government gives it, is not the issue, but this time, on the table, it will not be Ohaneze, PANDEFF, Southern Kaduna Association or Miyetti Allah.

Kure is of the view that, in the dialogue, the real leaders of fulani would be called to come and sit on that Confab as an entity because they claim they are the highest in population in Nigeria “and since they are, they desire a big table or sit on Confab and talk to the nation.

“Therefore they must bring them to the table. I want to see a fulani man standing there as fulani representative in the next national meeting”, he said..

Kure further stressed that the reasons why the crises in Southern Kaduna must be resolved, is that “You know I am a priest, and some of the people are coming to me and asking me to buy arms for them”.

“They’re calling on their Pastors to take part of the offerings and buy arms for them to defend themselves. Can you see the level of despair? People are no longer afraid”.

While commenting on the IDPs, Kure said the Church is alleviating them through prayers, giving them hope and keep them waiting on Government to resolve the issue. “At the same time they are calming them to wait for the savior that seems to be taken too long in coming and the people are becoming restless. End.