A message for anyone who hasn’t gotten the vaccine

As Terry Greear looked at his selfie — showing him with an oxygen mask on his first night at the hospital with Covid-19 — he relived the fear he felt that day.”I was extremely scared,” Greear said.He didn’t understand what was happening to him. He was a 42-year-old elementary school coach who was athletic and healthy . And now he was having trouble breathing, was running a fever and his fingers had turned blue. On his mind were his two sons, Matthew, 16, and Ryan, 12, and his wife, Stephanie.Describing those moments recently, Stephanie Greear broke into tears. In the emergency room, she’d feared the worst, she recalled.”I kept thinking, ‘Oh, my God. What if this is the last time they (her sons) saw their dad?'” Stephanie said.That was the beginning of a 72-day battle with Covid-19 for the Greear family. Terry says he doesn’t remember many details because his condition deteriorated quickly. But the agonizing moments are forever etched on Stephanie’s mind. That night, she became mom and dad to her children.

All the while, Terry fought for his life. 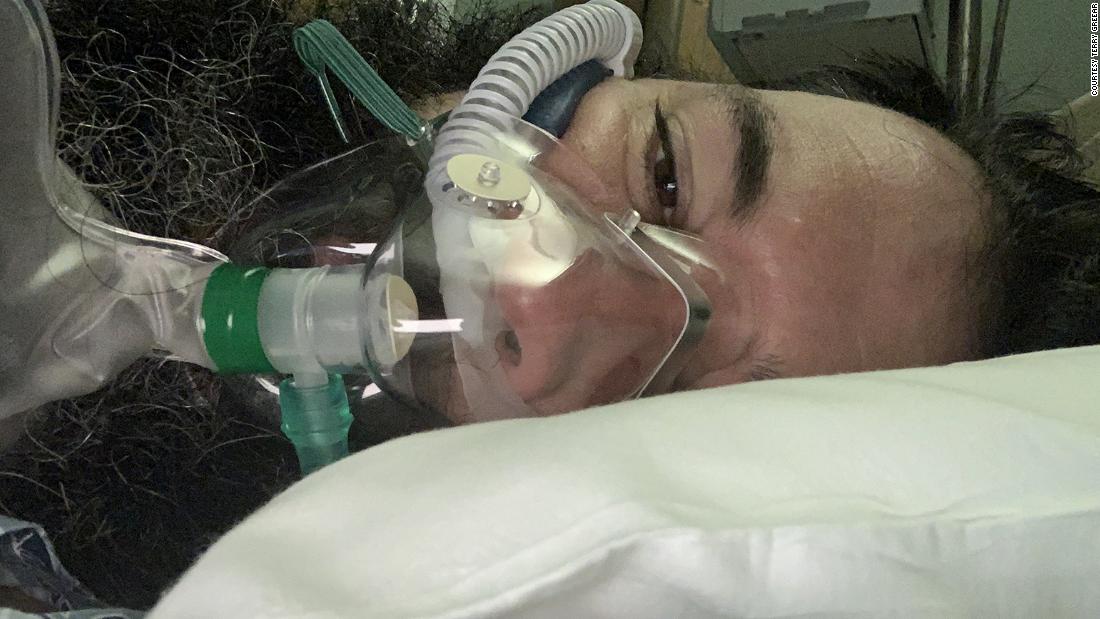 Terry Greear took this selfie on the first day of his 72-day hospital battle with Covid-19.”She’s a superhero,” Terry said. “She was my superhero.”As Terry heads back Tuesday to teaching, his family wants to share their rollercoaster of pain, they told CNN, to try to save others from living the kind of agony they endured — especially as average daily coronavirus cases have surged eightfold in Florida in the past month, a CNN analysis of Johns Hopkins University data shows.

It was mid-January of 2021. The Greears, who are die-hard Tampa Bay Buccaneers fans, were hoping the Bucs would make it to the Super Bowl. And Terry and Stephanie were looking forward to doing something fun and exciting for their 20-year anniversary. The family was taking precautions against Covid-19, with both parents planning to get the vaccine as soon as it became available to people like them in their 40s.But one night, Terry, who’s gone by Coach Beard since one of his kindergarteners had trouble pronouncing Greear, was heading out the door to coach a high school soccer game when he felt sick.”I didn’t feel right,” he recalled. “My body felt hot.”Terry was running a fever, he said, so he stayed home from the game and got tested for Covid-19 the next day. He tested positive.”You’re going to be OK,” Stephanie remembers telling Terry. “You’re going to be sick for seven to 10 days. You’re going to be fine.”But in a matter of days the healthy, 42-year-old elementary school coach passed out, his fingers turned blue and he was rushed to the emergency room. He was later transferred to the intensive care unit.Every time Stephanie’s phone rang, she felt panic, not knowing the type of news awaiting her on the other end of the line, she said.”I held my breath the entire time,” Stephanie said. “I never knew what they were going to tell me.” 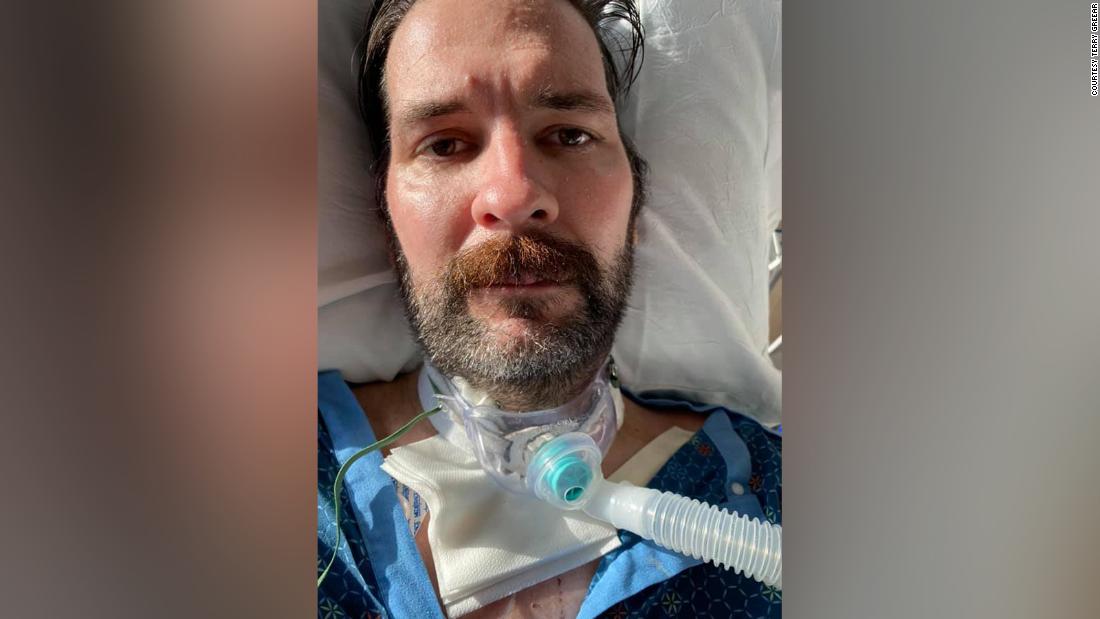 Terry Greear’s iconic beard was shaved in the hospital. He lost 50 pounds.The worst phone call came at 5 a.m. on January 24, when she learned her husband was getting intubated and placed in a medically induced coma, she said.”It was the worst phone call I’ve ever received in my life. I couldn’t believe it happened,” Stephanie said. “I asked the doctors and nurses if he could hear me. She (the doctor) said, ‘Go talk to him. He may be able to hear you. We don’t know.'”Stephanie remembers the sounds of the machines all around him. She broke into tears describing how she prayed over his body and then played his favorite music — reggae rock — hoping it would drown out the sounds of the machines.”I asked God to please save him,” Stephanie said.

‘I don’t remember because I was out’

Students and staff decorated Terry’s school office with posters that said, “We ♥️ coach Beard,” “We miss you,” and “Best coach ever!”Physical education teachers designed “#CoachBeard” T-shirts for everyone to wear.And Stephanie filled his hospital room with pictures of family and friends. She wanted doctors and nurses to know he was a teacher, a father and a husband and he was loved, she said.

Terry Greear remembers seeing this poster with pictures of friends and family when he regained consciousness.”Whenever I was coming to, or awake, I would see pictures, and the first picture I would see was this heart that says ‘We love you,'” Terry said. “That sort of gave me a little relief. Knowing that they are not physically there but I can see them.”As the days and weeks went on, Greear’s iconic beard was shaved off. He lost 50 pounds. His lungs collapsed twice. He was placed on a ventilator, a feeding tube and a lung bypass machine.”I don’t remember because I was out,” he said.He missed the Tampa Bay Buccaneers win in the Super Bowl. He missed the 20-year anniversary he’d hoped for. The memories of his 43rd birthday are very thin: patchy recollections of the balloons his wife says she delivered to his hospital room.But Stephanie remembers every twist and downturn of his condition, especially when she felt she had to explain the severity of Terry’s condition to their children.”The worst part was telling my children that their father may not come home. And thinking that they didn’t even really get to say goodbye to him,” Stephanie said, tears welling in her eyes. “It was, it was hard. And he’s my partner in life. It was, it was unimaginable for me to think about going through life without him.” 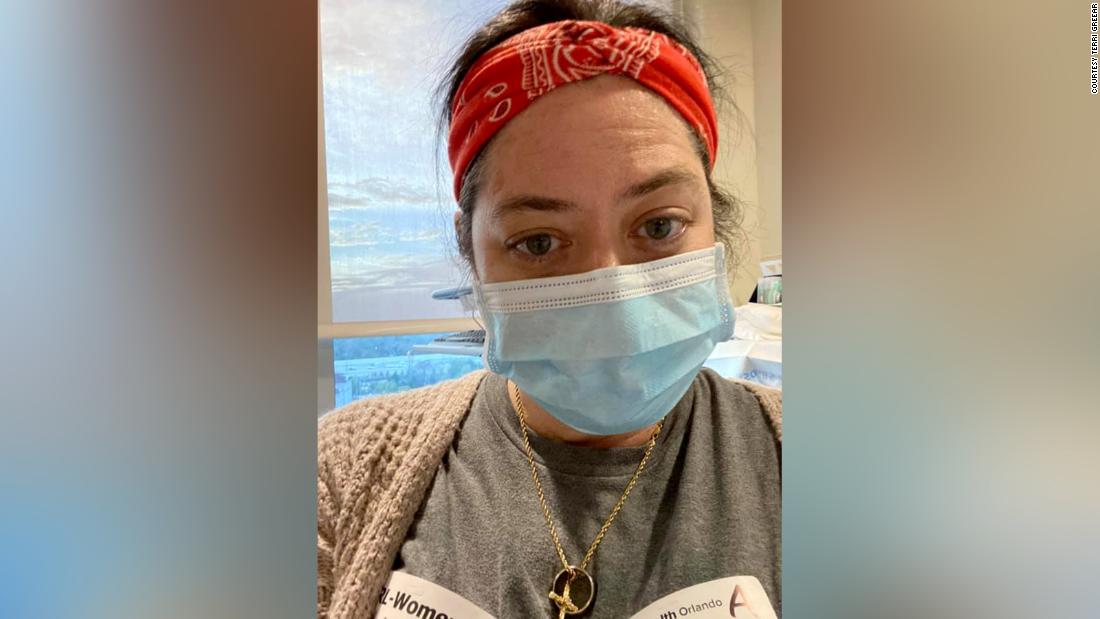 Stephanie Greear wears her husband’s wedding band around her neck while he battles Covid-19.

‘I had to start fighting’

Terry had to get his head right to battle Covid-19. He credits Stephanie for helping him tap into his competitive instincts and for getting him back into the fight.”My wife told me, ‘You’ve got to do this,'” Terry said. “Something kicked in where I had to start fighting. And I fought hard.”After about two months, he turned the corner. Terry was beating Covid-19, but now his body was so weak he couldn’t do basic tasks.”Trying to put a sock on with two hands was impossible. There was no way in the world I could do that,” Terry said. “My brain is saying: This is what you’re supposed to do. But my body is saying: No, you can’t.”Terry entered an intensive rehabilitation program where he relearned how to do basic tasks, like dressing, washing dishes, walking and getting in and out of a car, he said.”I want(ed) to do normal things,” Terry said.But being home from the hospital was everything but normal. He relied on an oxygen tank and a walker. Walking from his front door to the mailbox was exhausting, he said, and he had to sit down, rest and check his oxygen levels. 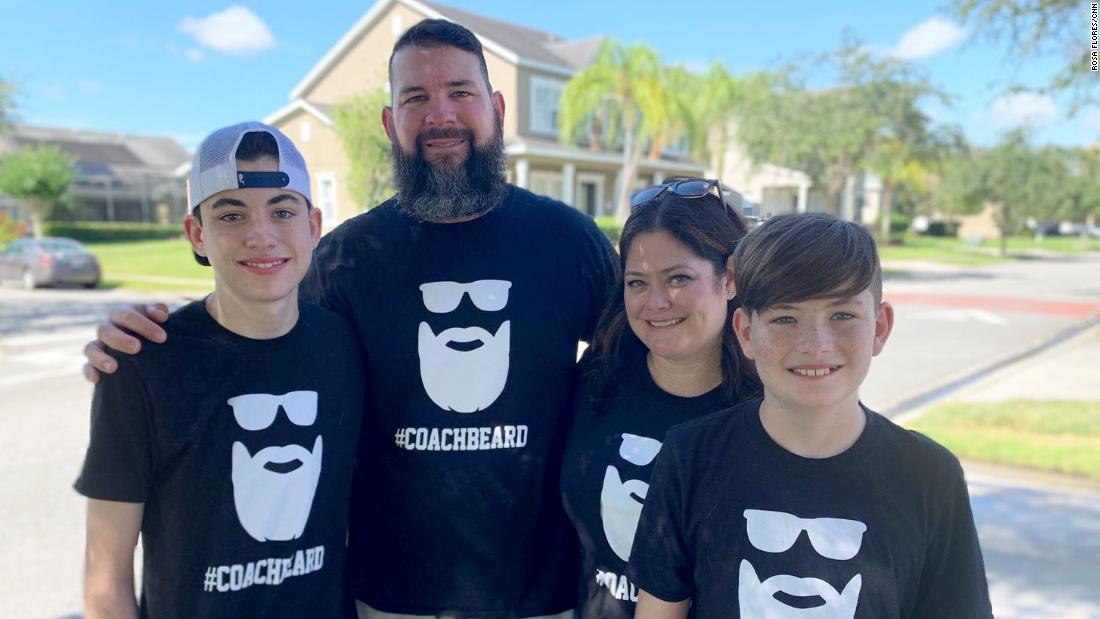 The Greear family wears their #CoachBeard T-shirts after Terry Greear beat the coronavirus.

Today, Terry’s beard is back and the oxygen machine is gone. He passed along the walker to his grandmother. And while he can walk around the block without getting short of breath and even play a little basketball, he doesn’t feel 100%.”I want to go run, but I’m afraid to go run,” Greear said. “I’m still waiting to find out where my lungs are at this point.”His goal is to run a 5K in November.Slowly, he and his family are trying to recover the time lost — the 72 days he spent in the hospital. To relive the moment the Buccaneers won the Super Bowl, they had a Super Bowl party at home. Reliving their 20-year anniversary will have to wait, Terry said, until he feels better.But one thing doesn’t have to wait, he said. It’s a message he has for everyone who will listen:”Get vaccinated,” Terry said. “I don’t want anybody else’s family to have to go through what my family went through. No one’s wife or husband needs to tell their kids that mom or dad may not come home.” (Copied from CNN)